A road trip, a smile, some tears and somethin' stinky 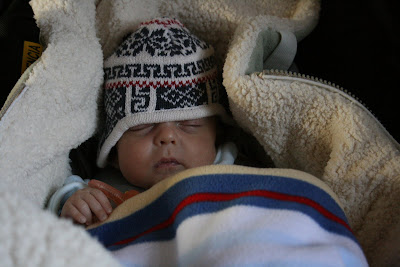 (Zonked out in his carseat) 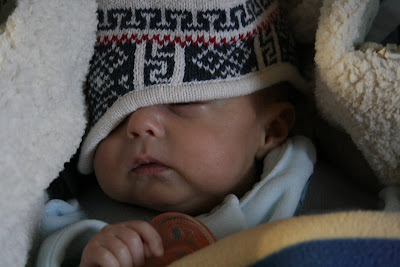 (I have to laugh at this picture....out cold...binky in one hand....hat having been messed up and pulled down over his eyes....but he doesn't mind a bit.) 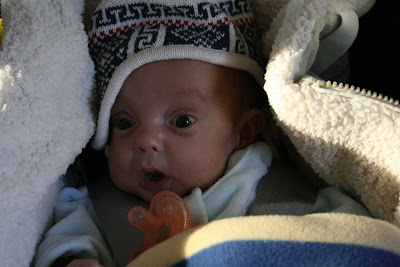 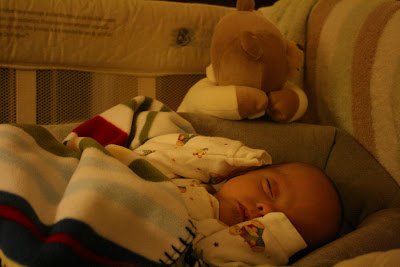 (All tuckered out from a long day. Tina....Colby loves his bear. We put it on almost every night for him. Thank you!)

Colby's appointment with the neurosurgeon went well today. I was somewhat surprised at how quickly the consult went. The doctor and his assistant came in and were very pleased at the softness of Colby's fontanel. He also remarked that the gaps between the plates in Colby's skull fell 100% better than they did. In other words, Colby's hydrocephalus was pushing the plates apart and thus leaving gaps in between then. After his spinal tap, the pressure was relieved and thus the plates have gradually come back together. He said he wanted to follow up with us in about 2 weeks and take things from there. So I was very pleased to hear this.

Today's outing was the first time I brought Colby out by myself....or any baby for that matter. I wasn't nervous...more interested in what kind of an adventure it might become. But all in all it was uneventful. The only issue was in the waiting room when I was trying to fill out he 5 pages of questions about Colby, his doctors, medications, surgery history, etc and he started to cry pretty loudly. I had his car seat on the floor, his binky held in his mount with my left hand, my foot under the corner of the carseat rocking it and trying to flip through and complete paperwork with my right hand. I know...I know...all you seasoned parents out there are scoffing and probably saying "Welcome to parenthood!". But hey, it's all new to me.

The trip also allowed me the change to introduce Colby to Dave Matthews! I think he really liked it because he went right to sleep. haha Yup, a little Dave fan in the making.

All in all, I really enjoyed the trip. I love the whole minivan thing too! I guess I'm just loving being a dad to a newborn son and that's a good thing!

We've seen some changes in Colby in the past couple days. First of all, when he's really upset, he his eyes will get all teary. On the opposite side of the spectrum...smiles. Thus far, he's been smiling out of the blue. They're not sustained nor directed at anything in particular. However both Tracey and I noticed that he's crack a smile now when we're playing with him. What a warm feeling that gives me to watch this!

Hamilton seems to be warming up to his little brother. He was never nasty towards Colby. Just confused why we were talking to this little "alien" in the voice that we usually talk to him with. We would ask Colby if he was hungry and poor Hamilton would pop up and look at us thinking it was time for him to eat. He still looks our way when we talk with Colby, but I often find him sleeping near wherever Colby is. We've tried to give Hamilton some time too and that's made a difference.

Evan is also doing very well with Colby. He wants to be involved, but is also your usual 14 year old and wants his space too. So it's worked out well. I think if Colby would have came a couple years ago, Evan might have had a harder time with the sharing of attention and all. But it's funny how things work out.

I've been keeping you up to speed with Colby's BM situation and I thank you for all the comments and e-mails with suggestions. We finally had some movement. So maybe that'll just be his pattern.
Posted by Scott at 8:25 PM

So glad that he is doing so well!!! That is great news!!! :D We will be praying that everything stays the same, and gets better.

Hamilton will be protecting him no time, and will let you know when Colby is not happy. My dogs didn't know what to think when they first saw her and heard her. But, now when she makes any little noise, they come running, and look at us like fix her she is not happy. It is really funny. :D

Congratulations on a great appointment! And way to go dad - it sounds like you are well on your way to becoming a pro.

I agree with the previous commenter about Hamilton. When Cooper came home we kept several jars of very small treats around the house - any time Cooper got attention, Bear got a small treat to help him associate the baby with a good thing. He is quite protective of both kids, going to far as to 'herd' them in the backyard to keep them away from areas they are not supposed to go! He even lets Cooper put him on the leash and 'walk' him around the back yard for entertainment.

Oh, and yeah for Dave!