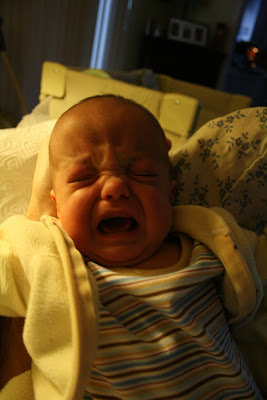 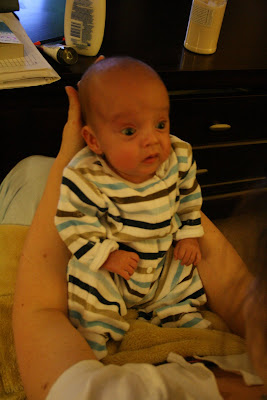 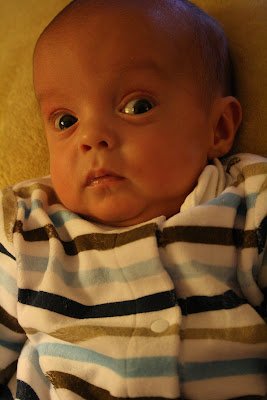 (Colby says "You're going to put that Triple Paste stuff where?!) 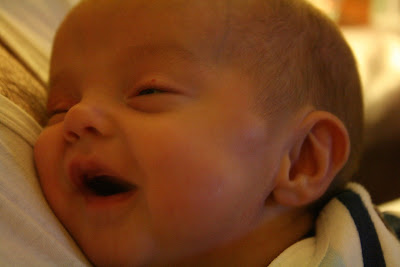 (On daddy's chest after a bottle.) 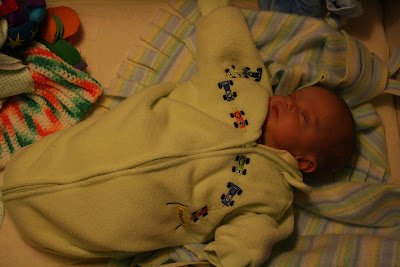 (Out cold at about 2am the other morning.)

Thank all of you for your comments and e-mails. It does help. : )

I'm feeling a little better now. It was just the shock of the news I guess that bothered me most. I've had time to digest it a bit. We're now waiting to hear from the hospital to see when exactly Colby will go back in.

We have an appointment this afternoon with the pulmonologist. We've been told that Colby has issues with his lungs as a result of being born so soon. It's called BPD (bronchopulmonary dysplasia). Here's a link about it.
http://www.kidshealth.org/parent/medical/lungs/bpd.html
However, when we don't know exactly how extensive his condition is. So this afternoon we're hoping to get some kind if idea from the specialist.

Tracey pretty much hit a wall yesterday. She's been pushing hard to take care of Colby and thus allow me to take care of my business. But you can only go so long until things catch up to you. She took naps in the afternoon and then went to bed at around 9. I stayed out on the couch with Colby to allow her some uninterrupted sleep. My day today is relatively slow. Just an office meeting in the morning, then wrap up some paperwork and finally our doctors appt this afternoon.

Well, it's taken me over an hour and 1/2 to get this posting done. Colby has been a little fussy. His belly is hurting him as he'll fuss and cry, then there will be a nasty eruption in his diaper followed by an indescribable odor. I gave him a bottle about 1/2 an hour ago and now he's in his swing...out cold.

Thank you for the suggestions for his diaper rash. We heard from many people that the Triple Paste is the best so I picked some of that up. I know it's the whole first time father thing, but I had to think as I smeared thick paste all over my son's butt and butt cheeks that this was just a very weird experience. Ahh, yes, all the parenting introduces you to!

My mom came over yesterday to see Colby and hang with us for a bit. I love it when my family comes over. I do wish we lived closer to my home town. We're currently about 1 hr 20 minutes or so away. It's certainly drive-able, but it's still a little far to just blast over to have dinner with them or something. I was away after college, first out of the country, then up at UCONN where I met Tracey. We've lived on the other side of CT ever since. Maybe once
Evan is out of High School, we can look for something a little closer. Most of my client base is in North Eastern CT, so we'll need to balance that. Tracey's family is also over this way. What about Colby's fans? Do you live close to family? Do you wish you did? Or maybe you have a "Everything Loves Raymond" thing happening and wish you were a little farther away. haha
Posted by Scott at 4:45 AM

Hi Scott - This is just one more bump in the road for Colby, and without those bumps wouldn't it be kind of boring? (although by now, I'm sure boring would be welcome). Just think that when he grows up you'll wonder where this big strong man came from, and think back to all he overcame to get where he is. I'm praying that everything works out wonderfully!! Onto your question, my parents live about 1 1/2 miles away, and most of my many aunts,uncles and cousins live in the same town. I bought my aunts house when I got married. It is great now to have everyone so close, but growing up everyone new everything we did. There was no getting away with anything!! Keep up the great work, you are great parents!! TINA

Hi Scott, I never answered the first blog question. I used to be an account specialist for the Acorn Fund (97-98), I had my Series 6 license. I hated it! I went on a trip cross country and decided there was no way I could go back there, so I joined the Coast Guard a week later(where I met my husband). My children are absolutely welcome to join the CG, it's a wonderful experience...after they get at least a two year degree. They can use the GI Bill to cover the rest. My husband is a federal police officer, they could do that, too...after they get a college degree. Education is really important to me, of course if it doesn't happen for reasons beyond our control, we'll deal with it. My husband follows the market, I do not.

We moved to where we live now, to be closer to family and to get out of the city. After Tyler was born, it was awful to not live near anyone we trusted with Tyler. We now live 30 minutes from all of my inlaws. All of my family lives in MA and ME. I do wish I lived closer to them, especially my sister and her growing family.

Isn't the human brains ability to adapt and overcome amazing. Both in your emotions yesterday and today in dealing with not so great news. And in the case of Colby's surgery, one little hole in a ventricle can make it better...wow.

hey scott...sorry about the bump in the road...it will get better when you know more, and a plan is in order..it is the up in the air crap that is hard to digest. where are you going to a pulinologist? CCMC? That is where Mason goes..My family is 2 1/2 hours away which is too far, especially if there is an issue. An hour would be perfect.

Sorry to hear about another hurdle, to overcome. But, you are a very strong family and you will be just fine. We will be praying for you guys, and we hope that his lung thing isn't as bad.

I never said anything about the diaper rash cream I like the best but it is Beoudreaux Butt Paste, it works awesome.

Hi guys...sorry about Colby. This time next year he will be running around, and this will be the past! I love his new picture's...Colby is so CUTE!!!!
Love, Mary and Hannah
P.S. We live about 10 mins. from my parents, and I love it...plus your mom is right in Thomaston to help with babysitting Hannah...that is a big help too!!!