Five years ago today Colby and Avery were born.  The future was unknown, unsettling and at times a bit scary.  The weeks that followed their birth were extremely hard.  Avery's passing was numbing at the time and impacts me to this day.  Colby's challenges throughout the years have changed our lives. Yet through it all, there was one constant.....a strong little boy with the willpower to survive, the determination to overcome and to spirit to impact those whose paths he's crossed.


This past year has been a wonderful year for Colby. He has adapted well to his mom and dad being divorced, having two houses and a change in routine.  The school remarked that had they not been told of the change in Colby's life, they probably wouldn't have known.
He continues to conquer challenges.  He can now move pretty quickly up the stairs and step off of small steps on his own.  He loves to ride his hot wheels, has his letters mastered and is working on spellling.  He will repeat preschool this year to allow him a little more time to get stronger on his feet and continue to catch up to his peers.
His gait has always been a bit different.  Within the past 6 months, he has started to run.  It's his own style, his own speed and yes, it's still a bit unsteady.  But now he prefers to "run" at just about any chance he can get, always challenging me to a race from the car to our front door, from the living room to the bathroom......just about anywhere he can. 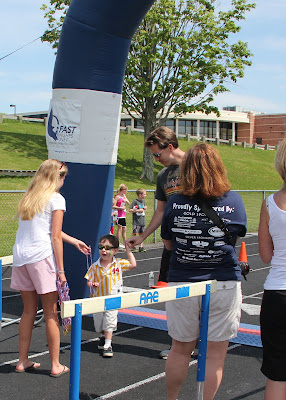 A couple months ago, he participated in a children's race.  It was a simple loop around a high school track.  He lined up with other children his age.  The gun when off and he stood there are first, not knowing what to do.  The other children all took off down the track.  I stood next to him and told him it was time to go. His eyes got big and he quickly replied "Oh! OK!  Let's go daddy! Come on!" and off we went, his arms flying about and his feet shuffling quickly down the track.  He was 100% focused at the task at hand...to run his first official race.   Colby was watching the track so intently as not to trip or stumble that he really wasn't paying attention to what was happening around him.  As Colby and I rounded the the end of the first corner, I looked across the field to see the group of children making their way to the finish line.  Colby was breathing heavy, his cheeks were red, his pace had slowed and he started to stumble and swerve.  I told him it was OK to walk and catch his breath but he wasn't listening to that.  A minute later he looked up and noticed that there weren't any other children around us.  We were alone on the track as we made
our way along the back straight away.  At first I my heart sunk, thinking he would be heartbroken to realize that the other children were so far ahead of us. But his perception was quite different.  He let out a strained giggle, looked up at me and said "Look daddy!  We're winning!!!!"  With renewed sense of motivation, he picked up the pace, breathing heavily and swerving down the track.  As we made it towards the finish, I heard the announcer say "Wait, there's another runner on the track!"  People came back to the finish line and cheered Colby through the end of his first race.  He received a medal as did all the other finishers before him, but to him this signified that he won his race!

I think that's a classic example of who Colby is.  He's a fighter.  He is motivated.  Sometimes he's not sure of how it all works, where he should go or what to do, but with a little help, he's off and running.  And although he may finish things at a different pace than others, his is a winner....in his mind and in mine.

My life with Colby marches to a bit slower pace than other parents of 5 years olds.  But the past five years have reinforced the belief that sometimes you cannot change what has happened, you can only affect how you react and what you make of it.  Do it right and things can actually turn out pretty good.  It's also solidified the belief that you should be thankful for all that you have, not taking anything in your life for granted. 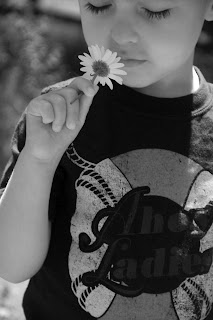 Thank you Colby Nichols Reed for all that you've brought into our lives...into my life.  Thank you for the joy you've shared and the lessons you have taught me. You are a very strong, intelligent and inspiring little boy.  You have overcome so much and have an amazing future ahead of you.  I hope you read this some day and realize the impact you have had on me.  Happy Birthday Colby! 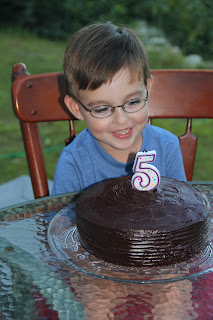