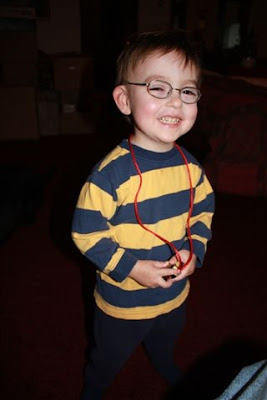 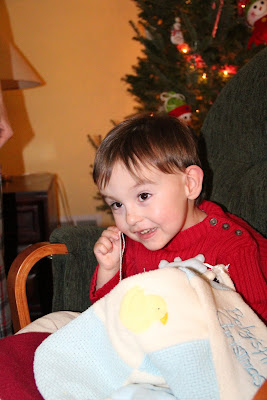 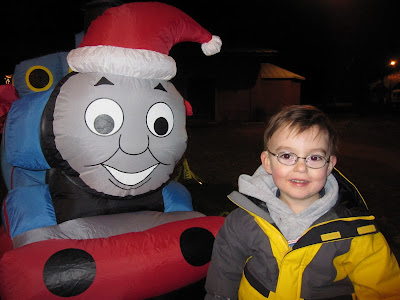 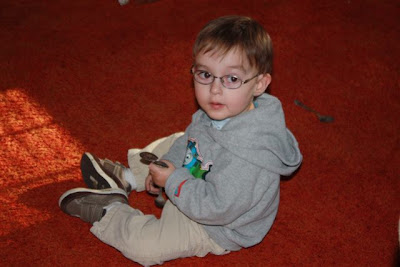 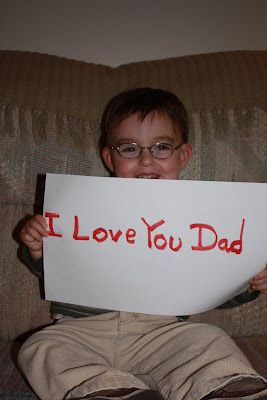 Our little boy is growing up quickly. He's conquered walking. He'll say he's running, but for now it's a fast walk with his hands held a little ahead of himself. Sometimes he reminds me of a tall stick with something balanced on top. If you let the ball start tilting forward a bit, you need to quickly start moving in that direction to keep the stick under the ball. That's what happens when Colby runs. He likes to live life on the edge and is just of the cusp of letting his body get ahead of his feet. All along, he'll be talking...rambling sometimes about whatever is on his mind. Sometimes it's what happened that day, sometimes it's what mommy or daddy said. Or he'll count, sing a song or just hum a tune as he wanders aimlessly back and forth, down the hallway to his room, spinning around, then back to the living room only to pop his head in the doorway to say "Hey guys, whacha doin'?".
Preschool is going very well. He loves his friends and teachers. He goes from preschool to daycare and rides in a green van. He loves to tell us stories about the green van. We also know if he gets talked to in school because he'll tell on himself. "Mrs M said "Shhhhhhhh Colby....in da wibrawy today." Or "yeah...I cwied today at school." Then, just as quickly as that thought popped into his head, he's off on another story or off he goes on a mission to find his little toy train.
.
He hasn't had that many cyclic vomiting syndrome episodes. He'll go through periods (like a week or two) when he'll have a lot, then he'll go weeks without any or with just a few. We think the episodes are getting a little less severe. There are articles to say that kids can outgrow the syndrome. We hope that's the case.
He's old enough now to get the whole Santa concept and tells us that he needs to tell Santa to bring him toys. We decorated our tree the other day. He saw all the lights light up and he gasped "AWWWWWW!!!!! I see da wites!!!" He's loving the candy canes and is very excited to see if Santa brings him any toys. We'll have to wait and see. : )