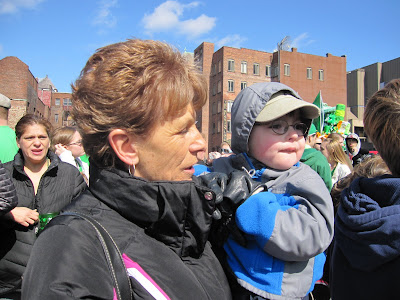 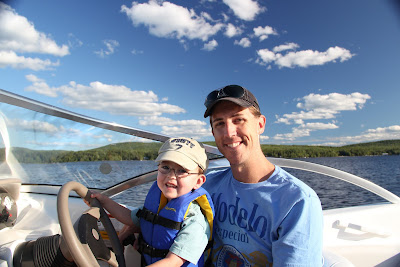 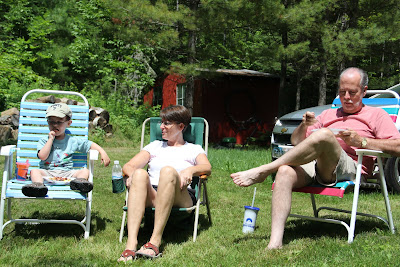 (At camp with Grandma Vikki and Grandpa Jud. July 2011) 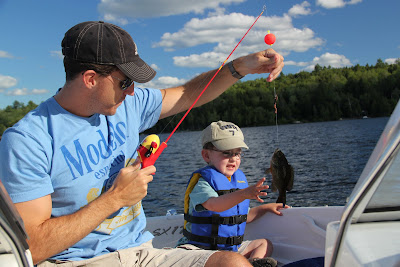 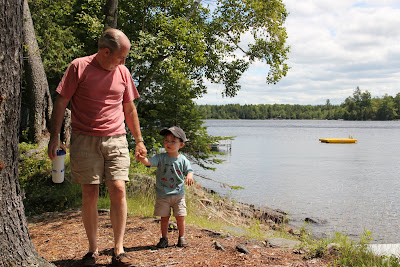 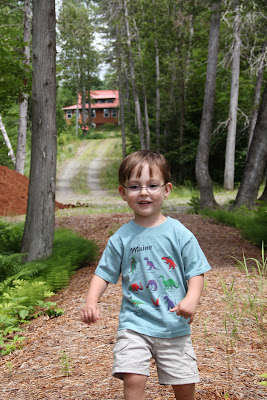 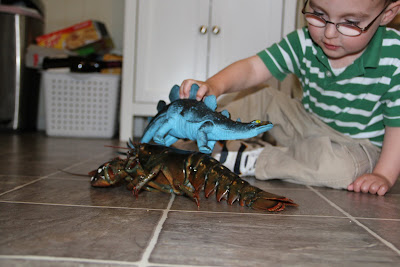 (Of course....put the dinosaur on top of the lobster....makes complete sense!) 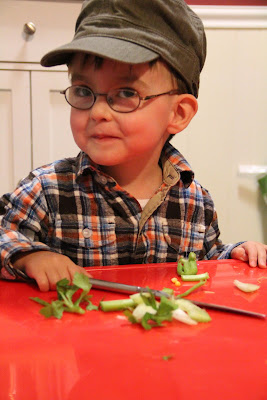 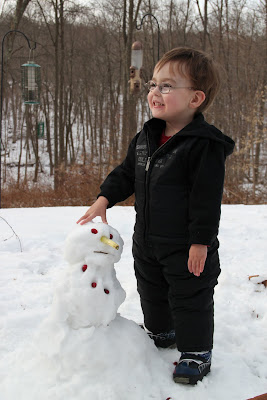 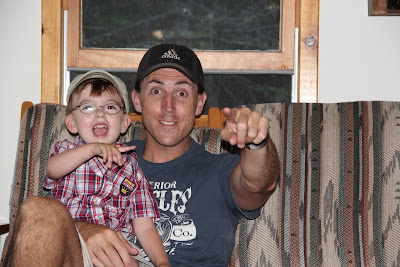 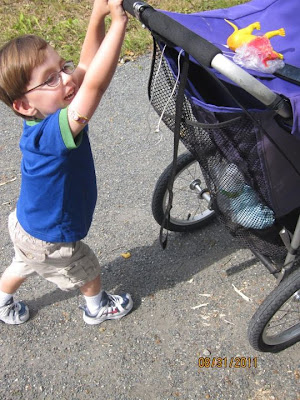 (Pushing his running strolling while out for a run with mommy. August 2011) 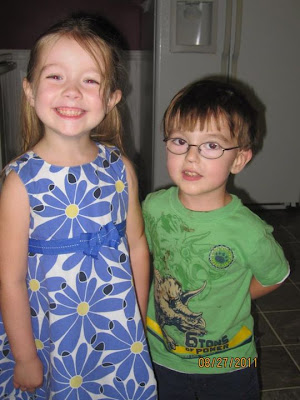 (He and his friend Kaitlyn at his birthday party) 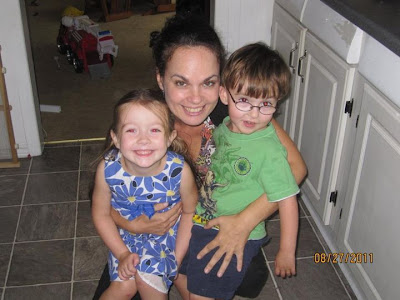 
Yes, our little boy recently turned four years old. The past 9 months have been very good for Colby. He's had relatively few issues.
He loves his preschool and daycare. He's made some friends there. The kids seem to be drawn to him. Colby tends to be quiet, in the background watching and taking it all in. He'll often play contently by himself. This isn't to say that he's antisocial or doesn't play with other children, but more often than not, he'll start off on his own until he's more comfortable.
He's doing very well with his walking now. He gets around like a champ. He's very flat footed, which seems to cause issues with his balance. We may end up exploring some sort of brace to help correct this while he's still young. Balance and depth perception seem to be his main hurdles at this point. If he comes up to a line in the ground, it's almost as if he isn't sure if it's two levels or not and he'll often stop and slowly test the area beyond the line carefully before he proceeds. We have seen notable progress in his balance. He has inserts for his shoes that help correct his flat feet. It used to be night and day between when he had his shoes on and when he went barefoot or in sandles. His balance was always better with the shoes and the inserts.
Recently, Colby has started to become much better on stairs. He still goes very slowly and at times, needs to rest. But again, we see notable progress there as well.
When it comes to his vocabulary and ability to understand and process things, he's amazing! Friends, family and his teachers often comment on Colby's understanding of things. He often seems to understand much more than your "normal" 3 or 4 year old.
Some people have commented that he's like a little old man...both in what he says and in his mannerisms. LOL And we agree. He makes little grunting sounds sometimes when he gets up or picks something up. His gate is a little unique when he walks sometimes. We think it's cute.
Luckily, we haven't had any issues with his shunt in some time now! That's a wonderful thing! There's always the possibility that he will, at some point, no longer need the shunt. But the only way of knowing is for him to continue without any issues with pressure in his head and then we can only assume that things are working properly. He's very aware of his shunt and calls it his "spout" sometimes. We're not sure where he got this name for it but we chuckle when he refers to his "spout" and rubs the area on his head where it starts down to his belly.
On another positive note, he's Cyclic Vomiting Syndrome (CVS) seems to be getting better...or at least he's going through a very good spell lately. Now I write this blog as he's lying in bed having an episode. But he hasn't had one in over a month and now only throws up once every couple months. Sometimes we can see it in his eyes. He won't eat much and will be quiet. Sometimes he'll break out in a sweat and get restless and eventually fall asleep. But it's better than the spontaneous vomiting and passing out that he had at the beginning of his diagnosis.
Many people continue to ask us if he'll outgrow the CVS. Like his shunt, we just don't know. So we've learned to live with it and make the best of things the way they are. If either of the two issues become a thing of the past...well then things will just be that much better!
So now Colby is four years old! He got into preschool a year early and will repeat the year starting tomorrow morning. He's a happy, vibrant little boy. He continues to be a happy, easy going little boy.
Posted by Scott at 12:29 PM 1 comment: