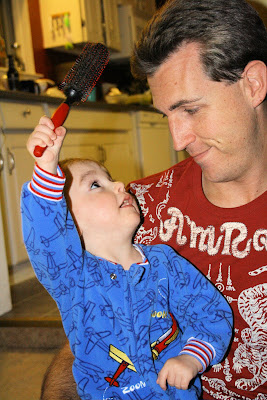 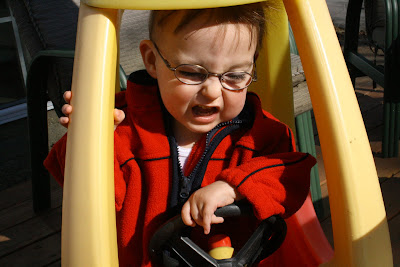 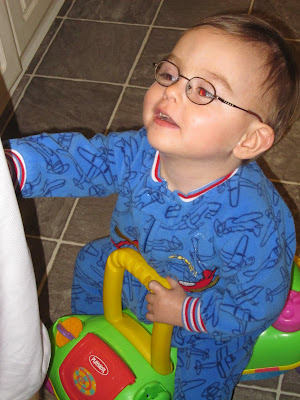 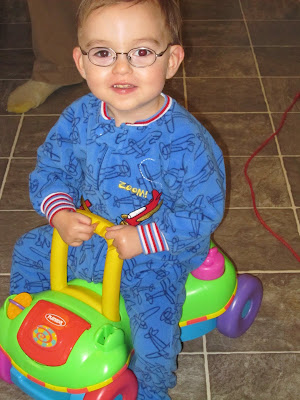 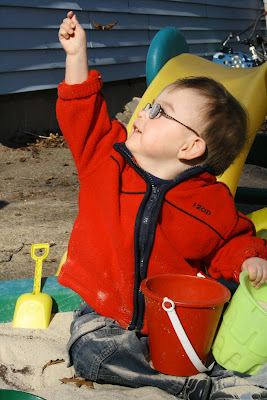 (Colby amazed and delighted when he found a leaf!)

Colby may not be walking...but boy is he talking!
His language skills are just taking off. It's so neat to see his personality really starting to come out as he can express himself with words now and at times repeat more than we would like him to. It melts me to hear his little voice call my name or call Tracey. He refers to us as "mommy" and "daddy", but every once in a while, he'll say "Twacy" or "Cots".....Tracey and Scott. He'll be in the car, I'll put Dave Matthews on and he'll say "Yeah daddy! Dave! I like it!". He'll also do his best to mimic some of the song lyrics. If he can't get the words, he'll hum the tune.
He is also becoming a bit of your typical two year old and now has a Time Out spot in the living room. He'll scoot himself over into his time out spot on his own sometimes and start talking to himself. "Colby....time out......let's talk.....no hitting...". After he's been in time out, Tracey will say "OK Colby,let's talk...why are you in time out.....". He puts his own accents and emphasis on different syllables and words sometimes that makes it all the cuter.
He's also doing pretty well with his counting. He can count rather consistently up to 7 now. He's working on his colors and usually does pretty well with Red, Green and Yellow.
His vomiting has mellowed out lately. He'll get sick maybe once every 3 weeks or so and the episodes seem to be a bit shorter than before. For a while it seemed like he was having about one a week. Some of the information we've read states that it can get better as the individual gets older. So that's what we've hoping for.
He is progressing with his walking. He still depends on one of us to put our hands out so he can hold on, but you can feel that he's much more stable, using our hands to correct himself much less often than before. He's also working on cruising around a table or anything else he can stand up next to. He's very unstable and unsure of himself. I think he's very capable of cruising more, but just lacks the confidence to move more freely.
He's due for another CAT scan to see how is ventricles are doing. Just a routine scan to give another benchmark and ensure things are the way they should be, though he shows no signs otherwise.
Colby is now 2 1/2. Birth to three has been seeing him ever since he come home. We now have a visit planned with the local preschool so that they can come and assess him to see if he will qualify to get into their program. I guess a child needs to be delayed in two or more areas. I think the only area that he is delayed is his gross motor skills as he's not walking. But i don't know enough about "normal" 2 1/2 behavior to really understand where he is. It's an odd situation because no parent wishes that their child has delays and needs special attention. But in Colby's case, we want him to have as much support, stimulation and care that he can get. So we really hope he gets into this program as it's right in the elementary school in town and has a great reputation. I guess they will come out in a couple weeks, take a look at him and I guess this will then determine if he'll qualify or not. We'll just have to wait and see.
He's not potty trained yet, though he'll tell us if he's going to the bathroom. We'll hear him tell us "I poopin" or "doin' pee-pee". So we'll need to tend to that pretty soon.
So I guess that's all the good news for now. We change the clocks this coming weekend and look forward to bringing him outside more. The cold and flu season will soon be behind us and we count our blessings that we made it through another winter relatively well.
I'll so what I can to try to take some video of him talking and put it up here before too long.
Posted by Scott at 6:07 PM 4 comments: