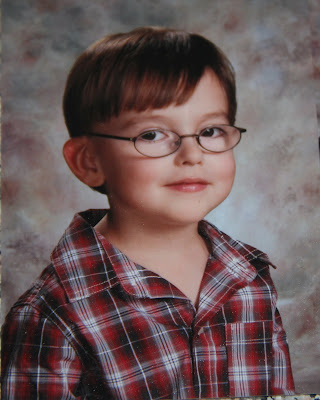 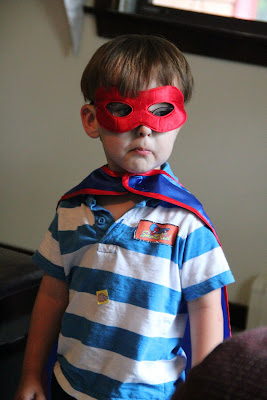 (Don't mess with the masked avenger! Thank you Aunt B for the cape and mask!) 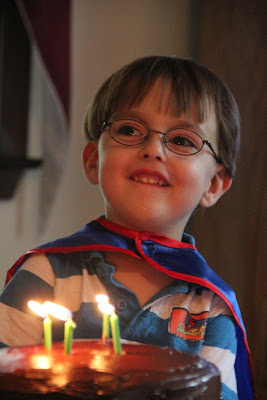 (Colby at his 4th birthday party getting ready blow out his candles.) 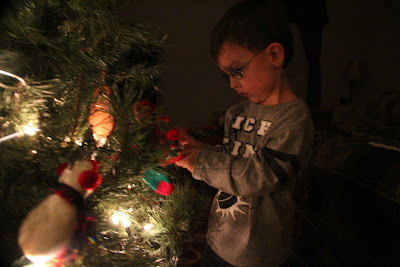 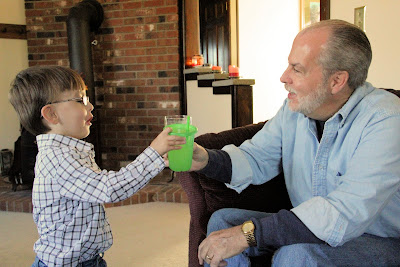 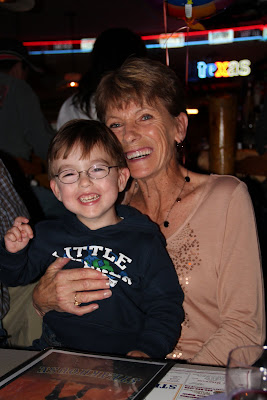 (Colby and Grandma Carole at grandma's going away party)
As with most things in life....the one constant is change.
The last year has brought many changes in Colby's life. After 15 years of being together, Tracey and I have decided to get a divorce. We are very amicable and remain very good friends. Colby is doing fine with the transition. A couple months ago, I went over Tracey's one day to pick him up, Tracey and I were talking when Colby came into the living room. He looked at me and said "Dad, no, you need to go home. You're not married any more!" Haha. Yup, he says what's on him mind!
In the beginning, he asked a couple questions about why he had two houses now. Our answer were and continue to be simply that mom and dad have gotten a divorce, but we still care about him and we're still a family. He seems very comfortable and content with those answers.
My apartment is on the second floor. So Colby now has 13 stairs (trust me...we count them just about each and every time we come home! LOL) that he's had to go up for months now and this has been a blessing in disguise. It's helped his little legs get stronger. He's still a little small for his age so for a while, the average step was above his knee. He's seemed to have hit a little growth spurt. That coupled with months of practice and he's now getting up and down the stairs much more quickly. As in our years together, Tracey and I continue to be very lucky in the way we work together with Colby. I'm very thankful for that.

Colby's CVS was getting better for most of the summer. He went months without any episodes. But the last couple months have brought some changes. He has been having more frequent episodes, sometimes more than one a week. He is old enough now to recognize that he's not feeling well and will often ask to lay down in his bed. A couple times he's slipped quietly out of the room, crawled into his bed and pulled the sheets over his head. When asked what he's doing, he replies "I'm not feeling well daddy. I feel kinda sick." 20 minutes later, he's back out, playing with his toys, singing and back to his old self.
As I write this entry, I look down to see him on his couch. He had an episode again tonight and actually threw up. He gets upset sometimes when he vomits. I think he's just frustrated with it and getting sick isn't fun for anyone. I asked him why he was crying and he said " It's 'cause I throwed up all over my shirt and I really like this shirt!" That's a typical Colby kind of answer.
His episodes now are quick and he seems to bounce back sometimes within just minutes. When he first started having them years ago, he would be out cold after the episode, unable to be woken and would then sleep for the remainder of the day. Looking back at those times.....well...this isn't too bad.
We have an appointment in a couple weeks to have him checked out again. Sometimes the increased frequency of the episodes has been an indicator that his shunt isn't working quiet right. I'm not sure this is the case. In the past when his shunt malfunctions, he goes downhill quickly. It may just be that he needs to increase his medicine. I'll hope that that's the answer.

Grandma Carole (my mom) and Grandpa Ron (her husband) have been a very big and important part of Colby's life. They recently moved to South Carolina. Like with many adjustments in Colby's life, he asks questions, processes things...but takes it all in stride. Colby and I are looking forward to our first plane ride in a couple months when we go down to see grandma Carole and grandpa Ron! Grandpa Jud (my dad) and Grandma Vikki (his wife) continue to play important roles in Colby's life and we're so very thankful for all four grandparents!

We have long wondered about Colby's depth perception. Whenever he would come to a change in color on the ground, or a defined line....like a door jam or a large crack in the side walk, he would stop, look to hold onto something and very carefully explore the ground in front of him. When playing catch, he seems to have no concept of when to close his hands or when to move his arms to get the approaching ball. It inevitably passes his hands and whacks him. Again, in typical Colby fashion, he usually remarks "ooops....that's OK dad. I'll get it!". He's bend down, get the ball, toss it back and then put out his arms ready to give it another try.
So we brought him to an occupational optometrist where he failed all of the depth perception tests. It wasn't much of a surprise and in some ways, more of a relief that he had a direction to take to address this latest challenge. He's been to an therapist once so far where he's been given a patch to wear a couple minutes each night, alternating eyes. The doctors and therapists seem to think that this is something Colby will be able to overcome in time.

Lastly, Colby will most likely repeat preschool again next year. Last year's experience was wonderful. But he was still playing a lot of catch up, had just started walking and the whole school experience was new. Because of his history, he got into preschool a year early. This year he is doing wonderfully. But his teachers discussed with us the option to have him repeat it again and allow his motor skills to continue to develop, allow him to grow and get stronger before he enters kindergarten. Given the wonderful progress he's made in the past two years, Tracey and I felt that it would be a good option to pursue.

Change is something that you cannot avoid. And as with many things, how you deal with change will affect the outcome and dictate whether the change resulted in something positive or not. Colby has been through a lot in his short life. In some ways, his journey has aged him beyond his years...making him stronger and more insightful than some other four year olds. He was presented with challenges that, based on statistics, might point to a rather bleak outcome. Tracey and I vowed four years ago to support and empower him to do as much as he possible could in life........ and look at him now, he's a normal little 4 year old......a smart, curious, strong willed, witty, loving little boy. I believe strongly that the people in his life have played such in important role his Colby's outcome. Although some of the recent changes in Colby's life have moved people around a bit and thrown in some new challenges, the support and devotion he gets from his parents, family and friends remain the same. And that's what's most important for him.
Posted by Scott at 8:37 PM No comments: