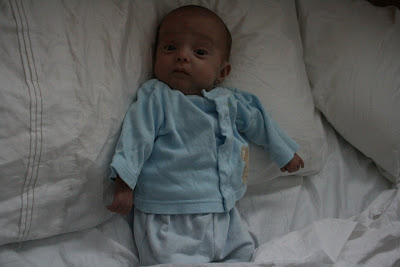 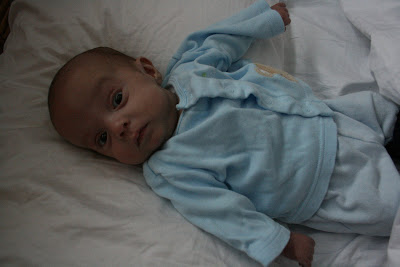 Tracey called the neurosurgeon today to ask them when they were going to perform Colby's operation. At first they came back with February 23rd or something like that...way out into late February. She called me on my cell phone to let me know. We questioned why they at first said they wanted to do it relatively soon, then all of the sudden it was almost a month away. And were they going to monitor things during this month? Tracey decided to call the neurosurgeon back and push for answers. After a bit of pushing, they agreed that this coming Monday would be a good day to do it. Why the change? I don't know. And in all honestly, I don't care. The bottom line is that if Colby does in fact need the surgery, then we want it done sooner than later.
To recap....his hydrocephalus is getting worse again. This was found after a follow up ultrasound was done a couple weeks ago. The doctor is going to try to do a endoscopic third ventriculostomy. However, he said that sometimes once they get into the brain, they find that for one reason or another it just isn't right for that patient in which case they will need to make a decision in the O.R. to then put in a shunt.
We don't know any other details at this point (i.e when he'll be admitted, how long he'll need to stay, information about his surgery or recuperation time). As we get those details I'll fill everyone in.
Many people have asked us how we're doing now with this latest upcoming challenge. It's not too different from the past 7 months.....just keep our heads and spirits up and do as well as we can to be there for Colby. We do feel that we just want to get on with things...we want Colby to progress, to get on track with his development, etc. Right now he's behind a bit. We're hoping the surgery, if it goes well, will help him overcome some hurdles.
I was reading another person's blog today. Her family has also been dealt an unexpected hand, their son has a form of dwarfism and also has hydrocephalus. In one of her postings, she writes about how it's hard not knowing how her son will be in the years to come. ....What will the quality of his life be? Will he be picked on? I would have to say that those exact questions/feelings have gone through my head countless times. That's not the way things are "supposed" to be. For me this has been the hardest part. I think about this most when I'm driving to appointments. Alone, in the car, just thinking...... It's out of our control, at least to some degree. So what can we do? Just try as hard as we can to empower Colby to be and do all that he can. I have the largest lump in my throat as I spill my guts here. But it's the truth. Sometimes life is tough. If you're keeping score, then sometimes life is unfair. People have different ways of dealing with hard times. For us, we just want to make the best of the situation we're in, focus on all the good that can happen.....spend our energy on how we can positively affect Colby, each other and others. If we do this we feel that we've had a good life and done all we can to help Colby have the best life he can.
So this coming week, Tracey and I will work together to be there for our little boy. Tracey is already off Monday through Thursday next week, so that's not an issue. I'll need to rearrange my schedule a bit, but that should be a problem. As we learn more about how long he'll have to stay in the hospital, we'll coordinate how we'll juggle staying there between the two of us. Luckily this hospital stay should be relatively short compared to before.
I'll continue to update everyone as I get more details.
Posted by Scott at 6:55 PM

I'm glad you finally found out about the surgery. We will be praying for little Colby, everyday. He is such a strong little man, and I'm sure he will be just fine.

I wonder the same things about Maleia. How will she do in school? Will she meet someone and fall in love? Will she get married? Will she have children? Will they have Down Syndrome also? I believe that every parent wonders these things, but it is the love and caring that brings children to there potential.