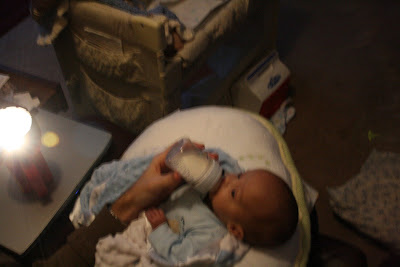 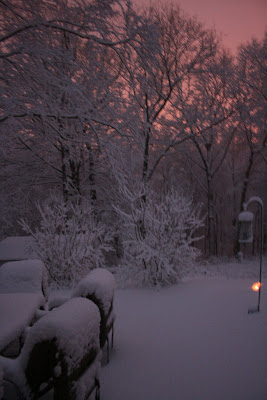 (Very early morning snow. I set the shutter to stay open and the ISO to 1600. It was still pretty dark out but the camera was able to catch this shot. The red glow you see isn't the sunrise, but rather lights from the center of town.) 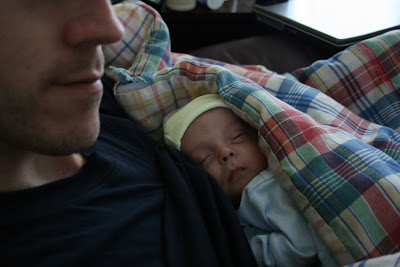 (Me keeping my boy warm this morning) 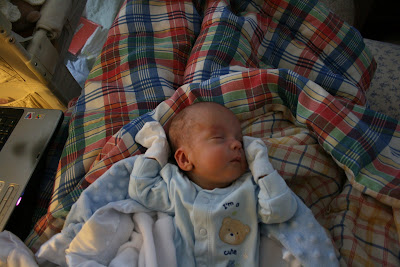 (LOL...socks on his little hands to keep them warm)

I started writing this early this morning...but as you'll read, the power went out. The second time it didn't come back on until close to noon. Then this evening I was having trouble staying connected to the internet. I'm finally posting this at 11:00pm
Well, this morning started off to a bit of a different start. Tracey watched Colby through the night as I have a busy couple days ahead of me. I woke up around 5am with work on my mind and decided to get up and let her come to bed and get a couple hours of uninterrupted sleep. I figured I'd hang with Colby and get some work done. I love working early in the morning....my mind is clear, everything's quiet. We're having a snow storm and I saw on the news that all the schools have cancelled and we're expected to get maybe 8 inches or so.
So I was all set up on the couch, laptop running, coffee in hand, Colby asleep in his cosleeper by the side of the couch. Then, just before 6am.....the power goes out. Here in New England, that happens from time to time. Depending on where you live, it can happen regularly in the winter. On the lake in Maine, it's a regular occurrence. Here in CT....not so often. But it happens.
Usually it's only out for maybe an hour or two. So I dug out a flashlight and a couple Yankee Candles and got them going. Luckily some of the work I needed to get done was not dependent on the internet so I continued to plug away.
But after about 45 minutes or so, I could feel the house starting to get cold. We don't have a wood burning fireplace. A couple years ago we bought a ventless fireplace that burns cans of fuel. Similar to what you see ...................CRAP.....the power JUST went out again!
Ow well, I'll keep typing and copy this into a Word Document when I'm done until the power comes back on.
As I was saying.....our fireplace burns cans of fuel that are just like what you see on a buffet under the pans of food....but larger. They throw off some good heat but with Colby's lung issues, I'm afraid that any fumes may bother him. So I didn't light them. But when you weigh only 7 pounds, keeping warm can be an issue. We don't have mittens for his little hands as they're still so small, so I got a pair of his socks and put them over his hands. I grabbed one of his hats and put that on him. Then, I reclined the couch, lifted my Tshirt, put him on my belly/chest and covered us with blankets. It took a couple minutes but he warmed up nicely.
A little after 6am he got hungry so I fed him by flashlight and candle light.
It's amazing how much noise there must be and you just don't realize it when the power is on. Because as I sat here in the relative dark, I noticed just how quiet it was. All I could hear was the couple clocks we have that are battery powered ticking away and Colby breathing. I guess when the power is on you can also hear the refrigerator, the satellite TV receiver makes a humming sound and I don't know what else must make noise. Anyway, just something I noticed.
Around 7:30 I saw the electric company's truck going up our road and I knew it wouldn't be long until power came back. Around 8:30 it finally came back on. And now as you see from my note above....it's out again.
Although I'm a full service Financial Advisor, I focus on Connecticut Public School Teacher's and their spouses as they have a unique situation. They don't contribute to Social Security and they have their own pension system. I had three appointments today, one with a teacher in her school, one with a Board of Ed regarding new IRS guidelines about their plan and one tonight with a couple at their home. Given that schools are closed, the first two appointments are scrapped. I'd imagine that by this evening the roads will be fine and thus I'll keep my evening appointment.
Thank you all for your e-mails and comments with suggestions about what to include on the blog. I will certainly entertain some of those ideas!
Posted by Scott at 8:31 AM

hahaha...I love the socks on Colby's hands. I hate when the power goes out...that's why we got a DVD player for the car. This way if we lost power Hannah can still watch the Wiggles!!! You will soon learn all about the Wiggles.
Love, Mary, and Hannah

Sorry the power went out. Maleia had the same problem with mittens not fitting a round her wrist, they were to tiny. But "'Child of Mine' from the makers of Carter's" have mittens that are somewhat thick and have an elastic band that goes all the way a round the wrist, and if you over lap that around the sleeve it fits perfectly. And keeps there little hands very warm. :)

Love the pictures!!! Keep them coming.

On the topic of topics. As I've done my blog, you go through periods when nothing is going on, then everything goes crazy and you have stuff to talk about. Don't feel bad about about going dark for a few days. . . or weeks. It's normal.

Nothing is worse then when you lose power. We had that happen to us once and we couldn't use electric or water. Carter was just over a year old, and you don't realize how much you miss that stuff till it is not available to you.

Colby looks adorable with the socks on his hands. I do that myself. You know what they say cold hands, cold feet, warm heart. I bet you and him just loved snuggling up together. Those times are precious.