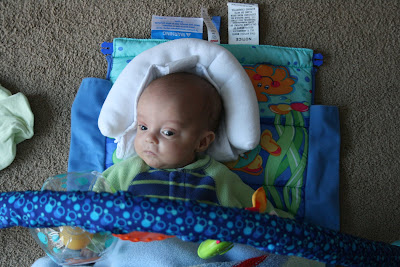 (this is the smaller playset I got him the other week, there are toys that hang down from the blue arch that we try to get him to recognize and play with. The pillow thing around his head is what we use to try to keep his head either straight or to his left. When he was in the NICU, his head was on the right side most of the time and thus the back of his head is flat on the right and pushed out a little on the left. It's hard because he favors his left side and tries to pull his head to the right as you can see he's doing here.) 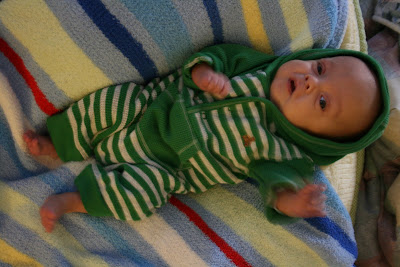 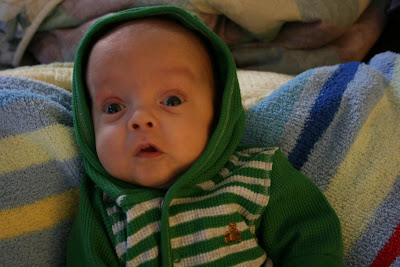 Well, sometimes things just don't go as planned. Colby was looking pretty pale yesterday morning and just wasn't acting himself. So we ended up not going to Thomaston and stayed home instead. He was really sleepy in the morning and continued to look a bit off. But by afternoon he was pretty much back to himself. I was really tired and ended up taking a nap in the afternoon which made me feel sooooooooooo much better. So I guess in the long run it was better we didn't go.
I still wanted to have a dinner with Tracey, one that we didn't have to cook. So we ordered out and had dinner together.....on the couch. Wasn't quite the same but nice none the less.
What a difference a couple extra hours of sleep does. Hopefully I'll be back on track with the blog and will update it more regularly this week. Today's a normal work day for me but at this point I don't have any night appointments so it should be a little easier week.
Here are a couple pictures of Colby that Tracey took the other day. (yes, I know..I need to start taking pictures again too)
Posted by Scott at 7:23 AM

Maleia has the same thing. She was kept on her right side, almost through out her whole NICU stay, because it helps them digest better, and more easily. Also, for every feeding we had to keep her on her right side for a whole month. I think though as she has gotten bigger it has become less noticeable. We tried to keep her on her left side when she slept when she was younger, but she would roll onto her back. But, now that she is rolling all over the house, she rolls onto her left side when she sleeps... it is too cute!!!