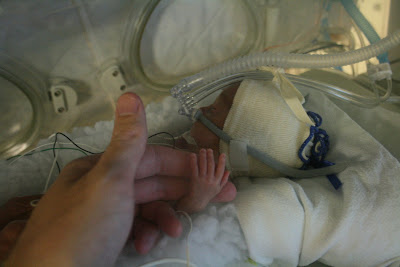 (Picture taken last night. The tube you see was his CPAP. That's now been taken off again and he's back on the ventilator) I just got off the phone with the NICU and for the first time in 4 days, Colby's head hasn't gotten any larger !! That's WONDERFUL !!!! I feel so relieved. The doctor said that this could be a roller coaster and his head could start to grow again. But hell, every day that it isn't getting larger means a day that he's more comfortable and less of a chance of complications. Ideally, his little head would go down a tad, but maybe he's waiting until tomorrow to give us some good news then too.
He is back on the ventilator. That's what we expected. I'm sure he's not happy about that but it's in his best interest for now. They've upped his feedings even more now. He's up to 2 cc's per hour. This is a huge step for him as just a week or so ago he wasn't even getting any feedings. With his issues breathing, I don't know if he'll got to a bottle anytime soon as that would mean he'd need to coordinate his swallowing and breathing. I just don't think he's up for that yet.
I'm looking forward to going to see him today. Tracey and I will head over there mid afternoon or so.
Posted by Scott at 10:52 AM

That is great news about his head and that they've upped his feedings! He is so precious !!!