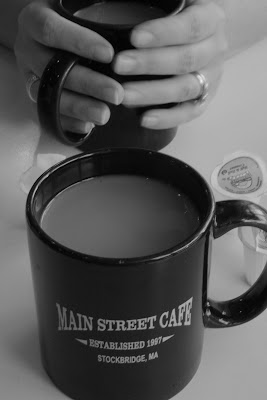 (B&W picture of Tracey and I having coffee during our overnight stay in Stockbridge last week)
Sorry for not posting in a couple days. It was a long week with work and all and yesterday was a tough day for Colby.
The doctors were a bit worried yesterday because he had a list of things going on. His alveoli in part of one of his lungs had collapsed. He had stopped urinating. Milk was backing up in his stomach and it looked like his digestive track wasn't working properly. There were some other things with his blood levels that I honestly can't recall right now. The doctors said they stopped his feedings and were going to do both a full blood test as well as a spinal tap to ensure that if he had an infection, that it wasn't meningitis.
We had been enjoying the last couple days as they have been going relatively well for him. But his was a taste of reality for us. He has a long way to go yet and we need to keep things in perspective.
Today he's doing better. The blood showed a very high level of white blood cells, so they started him on antibiotics and he's reacting well to that. Nothing has grown out of the cultures they've done. They aren't feeding him yet. That will be a couple days away. While they were doing the spinal tap, they drained a little extra fluid out to relieve the pressure in his head. As a result, his head circumference went down a touch this morning. His lungs also look like they're back to normal for him.
All in all, he did wonderful with this latest hurdle. He'll be on antibiotics for a while again now. They'll need to watch him to ensure that an infection isn't setting in somewhere. The cultures may show what/where the infection is, but if now they'll need to treat him as best they can.
As maybe you can tell, I'm tired tonight. I don't feel very animated and I'm still getting used to working a long day then going to the hospital at night. I don't know if that's anything you really get used to or not. Add the emotional ups and downs and you've got a recipe for pure tiredness.
We'll see what tomorrow brings. I snapped some pictures tonight while at the hospital and will post a couple tomorrow.

If you ask Tracey, she'll quickly tell you that I prefer things black and white. I want to know what the situation is so that I can understand and prepare. Colby has been a wonderful influence on me because there isn't anything black and white about his situation. Just goes to show you that you are always able to change and adapt in order to best get through things. All in all, I think we're coping well and riding the ups and downs as best we can. Tracey and I continue to get through this journey together. I'm the left foot, she's the right and together we keep walking along.
Posted by Scott at 8:27 PM

BTW-Be sure to tell Colby that his future girlfriend around the block will be expecting to see him! No excuses! :)