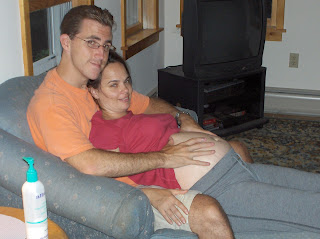 The doctors warned us that the one thing that will always be constant will be the uncertainty and the forever changing of the babies situation. Well...today was a great example.
Yesterday was great. I held Avery. Colby was lethargic, but content.
Today started with our normal call to the NICU in the morning. Things looked good. Avery was a bit agitated, but doing OK. Colby was his usual for past couple days. Big belly, somewhat lethargic, but stable. So I started my day and went to the office. Tracey was going to stay home as her car was in the shop being worked on and we were going to see them later today. About 9:30 this morning I got a call in the office. It was Tracey. "Avery's still doing OK, but something's wrong with Colby. His intestines or stomach or something is all wrapped up and he's going to have to have surgery." The doctors have been watching his belly since day one. It's always been distended and bloated. Whenever they'd try to put milk into his belly, he'd swell up. So in a way this made sense. Something was wrong with his digestive track.
It's a busy time of year for me and Tracey isn't working, so I need to keep my days full of appointments. The next thing I knew Tracey had found a ride to the hospital. She kept post there while I made my appointments, keeping me informed with regular calls as Colby went into the OR, came out and recovered. The doctors found that a part of his intestine has ruptured. There's a very serious condition called N.E.C. where the intestine gets infected, ruptures and sends all kinds of nasty stuff into the babies blood stream. The nurses reassured us that they think they caught it early enough that this isn't the case. Poor Colby now has a colostomy bag. They took the piece of his intestine out that ruptured and essentially have both ends now exiting his body. They will keep it like this until he heals and they can tell that there aren't any further issues going on. Then, they'll put the two ends together, put things back where they should and close him up. The doctors suspect this could be a good couple weeks.
Avery on the other hand had been doing great. I held her last night, she had good color, all was well. However, when Tracey was there today she would call me to say that her heart rate has been dropping. Then her oxygen levels were dropping and she just seemed extremely agitated. She didn't seem comfortable, crying and squirming about. Nothing seems to sooth her. The doctors are running blood test to see if they can detect what is going on. An X-ray of her lung looked as if one lung was partially collapsed. The doctors put her on her other side and are hoping it opens on it's own.

Tracey stayed with Colby and Avery through the day. I ran my appointments and then went directly to the hospital. Colby was still well medicated from his surgery when I arrived. The nurse said that because his little body won't be able to filter out the anesthesia quickly, he will most likely be sleeping for a good day or so. He looks OK. Very "plump" again because they put all kinds of fluids in him during the surgery and he's had another blood transfusion. But other than that, he looks peaceful and comfortable.

Avery is another story. She continued to squirm and look poorly. I tried to sooth her by reaching in and holding her hand, placing my and on her back, etc. But she wanted nothing of that. I decided the best thing would be to let her be. It's nights like these when you feel helpless. You can talk to them, tell them you love them and are here for them. But that's about it.

Given Colby's busy day, they weren't able to ultrasound his head tonight to check on his brain bleed. They were able to do Avery's but the results won't come back until tomorrow.

Tracey is wiped from the long day. I'm bringing her to get her car first thing tomorrow morning so she'll be independently mobile. Then I have a full day. I think the norm will be that Tracey will visit them during the day while I'm on appointments. Then I'll go see them in the evenings when I wrap up my day. She'll head home and make sure Evan's taken care of.

We've booked a night away, just the two of us one weekday night next week. We both need it. We originally were thinking of two nights, but neither of us want to be away from things for that long. That gives us a light to keep heading towards.

Tomorrow will be better. Hopefully Colby's digestive issue is now resolved. Avery could simply be irritate from her breathing tube. Or is there is something more serious brewing, hopefully the blood tests will shed some light and the doctors can work to get her back on track.

Again, the clock is reaching for 11:30. So I've got to crash for the night. Many of you have been e-mailing asking for more pictures. I'll do what I can but honestly, then they look so sick, I don't feel it's right to post them on their off days. When they're feeling better, I'll snap a couple and have them up. For now, here's one of my lovebug and I up at camp. She was tuckered out. I was doing what I could to sooth her itchy, growing tummy.

Scott and Tracey,
We are sending lots of love and prayers your way. Keep the faith and hope for the twins full recovery soon. They are strong fighters. Let your love shine through.

Peace and Love,
Tina and Ken

Lots of love to you guys....my godson had a colostomy bag for the first 9 months of his life and he came through it like a champ! Colby will too. No poopy diapers!
XO