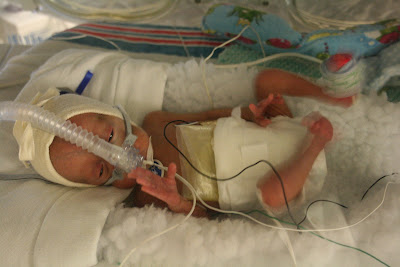 "And in this incubator, weighing in at a whopping 2 lbs, 4 ounces, wearing....well....the white diaper and crazy little hat.....Colbyyyyyyyyyyy Reeeeeeeeeeeeeeeeeeeeeed!!!" Yup, he's our little fighter. He's doing well again today.
I'm on appointments all day but often look at his pictures that I have saved on the computer. I love this picture. It was taken with the other recent ones last Monday night. You see the CPAP on him. He's back on the ventilator. If you were to look at him today, you'd see that tube taped to his mouth like in the older pictures. The picture cracks me up because it looks like he was trying to figure out what his hand was up to. Actually, if I think he was trying to mess with the CPAP. He's always pulling on his tubes and monitors. I still think he's trying to get the nurses attention by making his monitors beep. Sorry his feet are blurry. He loves to squirm around when he's on his back.
These past couple days have been wonderful for him. Relatively little news, which in his case is good. Are we in the clear then? Unfortunately not. He has a lot ahead of him. He needs to breath on his own. He will have to have surgery again to reconnect his intestines together. His oxygen level continues to bounce around and that needs to stabilize. He needs to gain weight. Thus far he's fed by a small tube that goes in his nose of all places, and meanders it's way down into his belly. So he'll need to get to the point where he can swallow and all. His head continues to worry us and ongoing ultrasounds will monitor the progress there. Things like vision impairments, any mental limitations or issues and muscular or neurological complications will all present themselves down the road. So.....we're having a couple good days and we'll take them with a smile !!! Everything else, we'll just have to tackle as they come along.
Colby is officially one month old today. To think of all he's been through is amazing. He's a strong little fighter!!!
Posted by Scott at 1:15 PM

We are so glad that Colby is doing well!!! As I read your story I remember the days when my little girl was in the NICU, granted it was only 26 days, but it seemed like forever. We are praying for you and your family, we pray that Colby gets better and stronger everyday, we pray that with every step backwards there is two steps forward, we pray that the day will come faster than expected when you get to take your little man home!!! GOD BLESS YOU!!!

Your little Colby is a indeed a fighter, no doubt he inherited that trait from both of you! I continue to keep all of you in my thoughts and prayers.