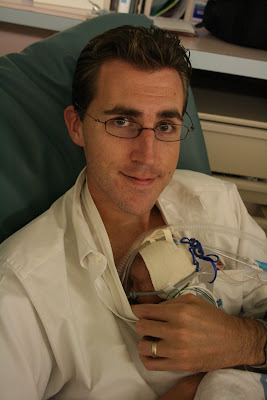 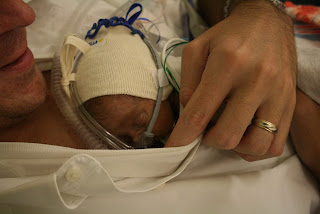 Good things do come to those who wait. As you can see, I got to hold Colby for the first time tonight. I wasn't expecting to be able to do so and was coming from a client appointment, so I had a dress shirt on with a T shirt underneath. To keep Colby warm, they had to tuck him under the t shirt. Sorry for not being able to see much of him. You've gotta love his crazy little hat they have on him, huh?

He was doing well. His ultrasound came back with no change to his brain bleed. That's good news. Yeah, to see it go down would be better but maybe we'll see that next ultrasound. A little more hydrocephalus, but we knew that from his head measurements. They even had him off his ventilator. He had what they call a CPAP which blows constant air into his nose. He seemed very happy to have the breathing tube out of his mouth. When he has that he can't move his head much and he looks very uncomfortable. He was doing OK with the frequency and depth of his breathing, but his lungs aren't mature enough and he's wasn't getting enough oxygen from the air. He'll go back on the ventilator tonight. Hopefully he'll be able to try to get off the vent again soon.

They've also upped his feedings and he's doing great with that. He's now up to 1.5 cc's per hour.

He's just adorable. He will watch me when I peer in. When I put my hand into his incubator, he'll watch my hand to see what I'm up to. He watches his stuffed doggie that you see in some of his pictures. We're glad to see that number one he can see and secondly that he can follow with his eyes. Also he can hear us. When we talk he'll sometimes open his eyes. Things you probably don't think much of but given our situation, we're quite happy to see. He'll grab onto my finger and hold onto it. That's my boy !!!

After a rough couple days, things are better for now. The doctor will do another ultrasound on Thursday. We'll just have to watch to see what that brings.

yeah! You were definitely due for some good news! Love the picture!

What a proud Daddy!!!! And so you should be!

Thank you for sharing with us.

Hey there so glad to see you holding Colby! I have to say it is awesome!! I cannot wait to see the next set of new pics! Thoughts and prayers with you all!

Those pictures are just priceless... very touching indeed.
Thanks for sharing them.
Hugs.

Isn't that such an amazing feeling? I will never in my life forget holding my boys for the first time in the NICU. Colby is doing great and I'm so relieved that he is already following you with his eyes! That's wonderful news. You are such a proud Daddy and it sure does show in that picture. Congrats!

I just learned about your blog today along with the sad news about Avery. Words can't express how sorry I am for your loss. My love and prayers are with you and your families. Please let me know if there's anything I can do.

What a proud dad you are! Your face says it all. I don't know you,but I somehow stumbled upon your blog while looking at a friends myspace...now I check it everyday and pray for you and your family.