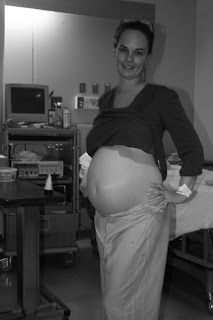 It was a Monday, I was at the office and my phone rang. It was Tracey. She sounded a bit nervous and said she was going to her OB because she was "leaking" a little. I had a couple appointments I needed to try to keep so I stayed in the office waiting for her call updating me on what was going on. That phone call came, but not with the news I wanted. She said I had to hurry and go to the hospital because it was in fact amniotic fluid that was leaking and she was dialated. I dropped everything and met her at the hospital. At this point, we were 22 weeks and 5 days along. The doctors said that twin A, which was Avery, had ruptured her membrane and that most women go into labor within 3 days when this happens. We were devastated. To make matters worse, the doctors said that babies weren't considered viable until 24 weeks gestation so if the babies came then, the doctors would "give them warmth, love and keep them comfortable" but that's all they could do. No medical intervention would take place.
To make a VERY long story shorter....we stayed at that hospital for 5 days until UCONN Health Center would take us. We were transported there and continued to defy the odds for 3 whole weeks. Tracey went through pure hell with all the different drugs the doctors used to keep the contractions away. For anyone who has been on Magnesium, you know what a nasty drug that is. She was on strict bedrest and had constant monitoring, day and night for 3 weeks. I cleared my schedule and stayed at her bedsite helping her as best I could. Once she hit 25 weeks or so,they allowed her more mobility to get up and take a shower and all. So I took advantage of this to snap a quick picture. : )
Posted by Scott at 9:49 AM