Tracey got to hold Avery for first time tonight 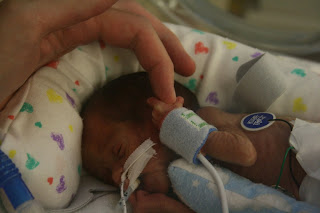 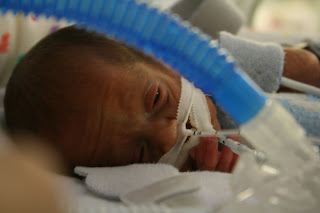 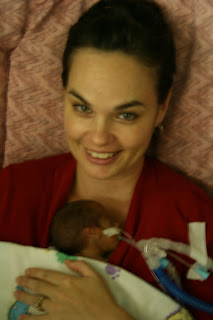 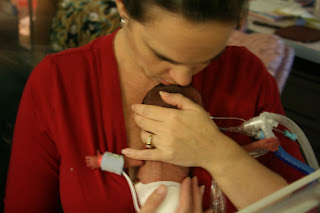 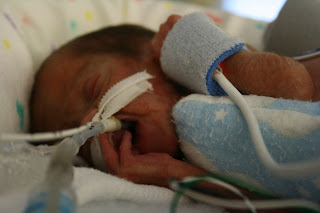 We called the NICU this morning as we usually do to see how the twins made it through the night. Avery was doing OK, but Colby was having a tough time. He has been put back on the osolating (spelling?) resperator which makes his little belly bounce up and down like a panting dog. It sends very shallow, but frequent puffs of air into his lungs. To the tune of about 130 per minute. Hopefully he won't be on that for long. He was doing OK. No very responsive. I don't think he likes being on that much but until he can get his apnea under control, he'll need to go on it every once in a while. Other than that, his belly was still large and he hasn't been fed milk in a couple days now. They're treating him again for a heart murmer. Hopefully tomorrow he'll be doing a little better.
Avery on the other hand was doing great tonight. She had her eyes open and was moving about pretty good. Tracey got to hold Avery for the first time. It made both of us sooooooo happy to hit this milestone !!! Tracey was nervous, but did great. Little Avery still had many of her tubes in her. I didn't hold her because I think I'm coming off of a cold and I don't want to risk gettin either of them sick. As long as her health holds, we'll be able to hold her each day. Hopefully Colby will get stronger so we can hold him as well.
Avery held my finger tonight stronger than she ever has. It was neat because if I tried to move my finger away, she'd squeeze tight and pull my finger back to her. Just an awesome thing to experience !!!!
She's still on her ventaltor too, though not the aggressive one like Colby's on. They're also going to try to feed her breast mild again tonight. They will start with 1/2 c.c. Just a drop. It's not intended for real nutrition at this point but rather to get her digestive track used to digesting something.
So all in all, today was a GREAT day. I hope Colby has a better day tomorrow. Like all of our other days...tomorrow will probably be different than today.

That is so awesome! I love the pic of Tracey holding avery. Now it's Colby's turn! You two are doing amazing with every step of this!

Happy two week birthday, Colby and Avery. It's so good to see that Avery finally got to be held by Mommy. Hopefully, Colby's turn will be soon:)

Thank you for sharing your story on here. Those pictures just tug at my heart. May God continue to bless your family.... today, tomorrow & always!