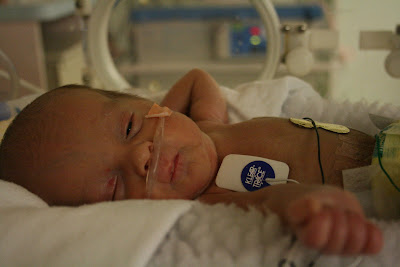 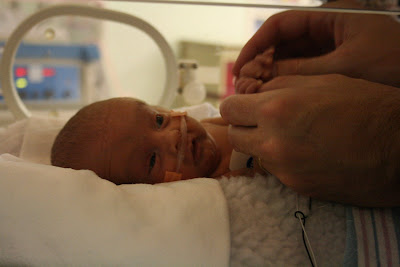 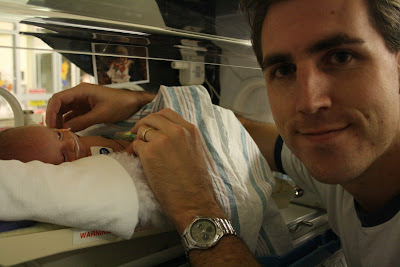 I looked back and saw a couple posts when we were "counting the good days". It's a bit of the same lately and that's nice. Colby was very content when I saw him this evening. He looked very good. No real change in his status. He still hasn't pooped. We're waiting for something to happen so they can start feeding him. The doctors will be getting more aggressive in trying to get his little digestive system moving. .
I love it when Colby is so wide-eyed. We can see progress in his eye coordination. He watches everything happening around him.
Tracey started working some new hours now. Wednesday and Thursday afternoons and evenings, then Friday and Saturday mornings. It's going to be very tricky trying to balance things when he comes home. We both need to work during the days, but daycare is out being that Colby's a preemie. That means getting someone to watch him at our home for some of the time. We'll look for a nurse who wants some extra money. One of the nurses had a good suggestion....a nursing grad student. We don't live that far away from UCONN, so that may work. Finances will get "tricky" to say the least when Colby comes home. But that's all part of having a baby.
I was speaking with the couple in our room who has a 1 month old baby who was born at 24 weeks. They're starting to feel burnt out. They're worn thin from the constant ups and downs, the daily travel and then nightly exhaustion. There's really nothing you can say to make things different for them. All I can do is listen and let them know each day is a new day. Their little one is currently fighting an infection. Hopefully that will resolve quickly. Although their baby was born even more premature than Colby and Avery were, he doesn't have any brain bleeds. So I told them in that respect they're lucky. But no matter what your little one's situation, time in the NICU is not fun and it's a long road. And it's a definite strain on the relationship. Very little is "normal" anymore. You're never home together and if you are, you're tired or doing what you can to keep up with all that needs to be done. At times, Tracey and I hardly see much of each other. It's an adjustment to say the very least.
Tracey wrote an e-mail to Oprah saying that she should have a show about Premature Birth. So who knows, maybe Tracey and I will be blasting to Chicago or where ever Oprah tapes.
Tomorrow may be my day off from the hospital. I'm tired tonight and I have to be on the road by 7am and won't be home until after 5. Plus, I'm traveling in the absolute opposite direction from the hospital. We'll just have to see what the day brings.
Posted by Scott at 8:52 PM

He is looking very well!!! He looks more plump, today!!! :D Things will fall into a routine soon, so it wont be so tiring.

You are in my prayers!!!
GOD BLESS,
Jamie, Jordan, and Maleia

Colby, looks super. So bright and alert. He looks like a perfect baby...just little.

I wrote to Oprah, too. I thought she should have one of her "Favorite Things" shows for preemie parents. I think we are all very deserving, it's a long hard road, that doesn't really ever end:) We still are trying to resolve poop problems, he's two!

Have you checked to see if Colby can qualify for Social Security benefits? I know in the state of VA your income doesn't matter for the first year, as long as you file while the baby is still in the hospital. I'm not sure that it's very much, but every penny helps.

Thanks for the advise. We did already file for Social Security Disability for Colby. It ends up being $30 a month. Not much, but just as you said, every little bit counts.

Thank you both for your support and I hope all is well with you and your families!! If you get a chance, I'd love to see a couple pictures of the little guys. You can send them to my e-mail: Scott4172@sbcglobal.net

I hear what you're saying about the relationship. We've had three NICU babies,our singleton daughter who was at UConn and our twin boys who were at CCMC. Both times there was an enormous strain on our relationship. And because we were concerned about the children, we felt guilty taking the time to be with each other. Sometimes it was just a simple hand-holding or bringing the other one a granola bar when they really needed it that made all the difference!
Hang in there. You guys definitely sound like you have the right attitudes towards this whole situation and that positivity will spill over to Colby and help him to fight.