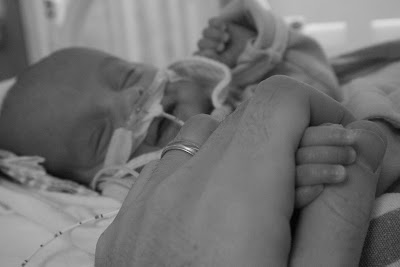 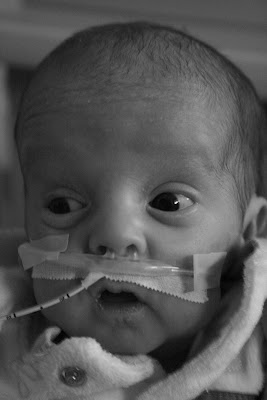 I was thinking on the ride home from the hospital today how much things have changed. I mentioned this before but we're counting the good days now. Colby is doing so well. He's now at 24 cc's of breast milk every 3 hours. Just yesterday they added some fortifier to his milk to add a couple calories. His weight has been hovering around 4 pounds, 5 ounces. It seems like his belly is working as it should be.
When I was visiting with him today he was very tired. I took him out for a short while and spent some good time with him. He got fussy after a bit so I put him back into his incubator. He's a growing boy now-a-days and that's bound to tucker a guy out.
Tracey, Evan and I have been busy the last week trying to start to get the house in order and ready for Colby to come home. We live in a cape. Tracey and I have had our bedroom upstairs along with a spare bedroom where I keep all my clothes. Downstairs we have two bedrooms, one of which was Evan's and the other was the oddball room with the weights, guitars and anything else we just didn't have a place for. Evan is moving up into our room, we're going into his room and the guitar/weight room will be Colby's. Thus far we've painted Evan's new room and moved the beds. Today Tracey and Evan spent a lot of time moving clothes from room to room. We still have a long way to go, but we're making headway. We are thinking that Colby may be home before the year's end, which gives us about a month and 1/2. However, we're not quite living the "normal" life. We have little free time so we're trying to nibble at it little by little. Friends and family have offered to help. We'll probably do a "painting party" when it comes time to paint Colby's room and ours.
And as for baby stuff....well...we have quite a bit of clothes, but that's it. Family and friends have offered to help with certain things. Tracey and I felt very awkward about having a baby shower because people already stepped in to participate in the March of Dimes Walk and then for our benefit dinner. But friends and family are adamant that they're going to do something to help us. Tracey and I understand that people are doing it because they want to help, but it's still just plain awkward being in our shoes. Everyone says that if the rolls were reversed, we'd understand. And we do. So our families are going to do something small just to help us out and that's wonderful.
I went to see our friends Liz and Chris' baby, Caitlin, tonight. She's adorable! And I can't get over how big she is compared to Colby. I've never felt comfortable holding a baby before. But now after holding the Colbster so often, I felt right at home holding Caitlin. Things are in a totally different perspective. I watched her move around to see if I could see a bit of her in Colby or visa versa. Being that I've never really paid much attention to a babies movement before, I simply don't know if Colby's movements are "normal" or not. I've been reassured by many that his sometimes jerky motions, his odd faces and his squirming about are all status quo. But for a first time dad, it's all new. And now having a preemie to boot just adds to the unknowns. So I'm just trying to take it all in and learn as much as I can.
The NICU does a great job offering classes and other opportunities to learn about preemie care and some things that surround that. They offered an infant feeding class the other night. Tracey thought she was getting a cold so I ended up going alone. I learned more about boobs than I ever wanted to know! But it was very interesting and although the father has limited involvement with this end of things, I think it's still important for them to understand what the babies and their mothers are going through.
Tomorrow night we have an infant CPR class. I'm looking forward to that. Not that I ever hope to have to use it, but the more you can learn about things, the more empowered you are.
I've taken a short video of Colby and hope to have that up in the next couple days or so.
PS....I put up two new polls on the top right.
Posted by Scott at 7:32 PM

I am so glad that Colby is doing so great!!! I was reading about a preemie who went home at 4lbs. 4oz., that was smaller than Maleia when she was born.

But, I know exactly what you mean. When Maleia was in the NICU, her best friend was born 20 days after her at the same hospital. When we went to visit them and I held Emma, she was huge compared to Maleia. Emma was born 7lbs. and Maleia at that time was 5lbs. It was so amazing how much of a difference 2lbs. made.

Don't worry things will soon fall in place, and your house will be back to normal in no time. When Maleia was born, we didn't have anything either. We didn't get to have any baby showers, since she was early. I was very stressed out, but we did have everything ready by the time she came home.

Just because we have a newborn at home doesn't mean there isn't time to help out friends! Caitlin will understand!

I'm glad to hear that you're going to accept a little help. When people offer, push the pride aside and don't be afraid to be specific about what you need and want. Trust me, I know it is HARD to do that but it will make a big difference. If you are able to get some outside help from loved ones in practical ways (meals, painting, shopping for baby gear, etc) you will have that much more time and energy to focus on Colby. And don't run yourself ragged making the house perfect - it will all fall into place. I was a wreck when our daughter arrived early and nothing was ready. But babies don't know. They don't care if there are unpacked boxes in their room or if there are piles of laundry in the corner. They just know that mom and dad are there and they are loved.

I'm so happy that Colby is doing so well. I totally understand the awkwardness of receiving so much. I flew to visit family for the weekend in MA, three weeks before Tyler came home, I figured I wouldn't see them for awhile once Tyler came home. With three days notice my mom and sister threw together a huge babyshower. I was so amazed by the generosity and support of family and friends, both close and not so close. I openly cried, I couldn't help it. To feel so loved, to know that so many people prayed and cared for Tyler and Hayden was amazing. Sorry for writing so much. Anyway, just accept what people are willing to give or do. It's because they care and love your family, otherwise they wouldn't do it :)

From our experience, at this age I think the jerky movements are totally normal. Tyler's little arms and legs would fly out of no where. We had a few of those velcro swaddle blankets, it was especially useful in the beginning when his was in the carseat or at home sleeping. It prevented all the unwanted movement...which would normally startle him awake :)

We are so happy that Colby is doing great! I love all the pictures of him...so CUTE!!!
Love, Mary and Hannah