"Not where, but who you're with that really matters.." 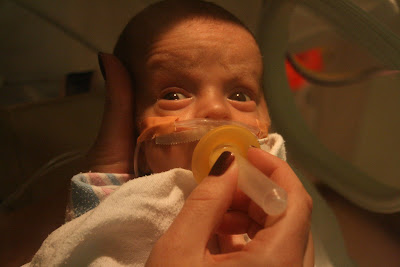 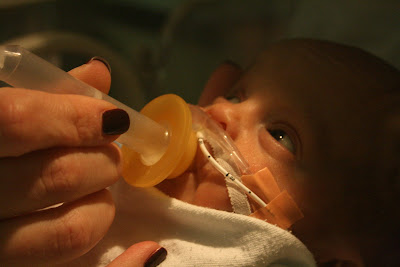 ( This gives you and idea of his little "bottle".) 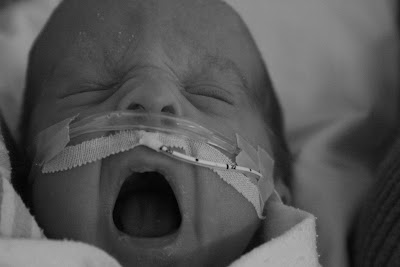 (Yup, tired again after having some milk) 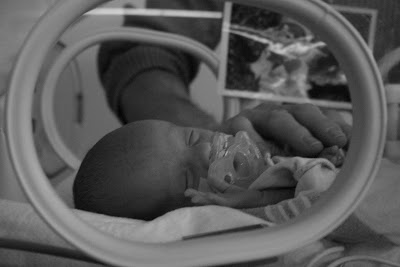 ( A neat shot of Colby in his incubator. They have openings on both sides to put your hands in. One side folds down and that's how we take him out.) 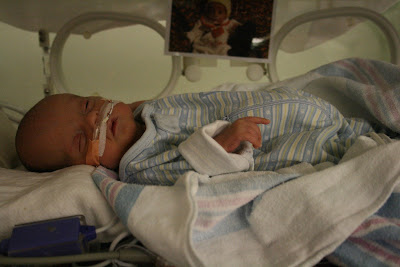 ( A picture of Colby napping. We have the side of his incubator folded down here. The preemie clothes are still too big, so he gets his sleeves rolled up and his feet swim around in the bottom.)

The pictures above show Colby feeding from his "bottle". It's not technically a bottle as the amount he eats is too small. But they put a nipple on a small tube and he takes his milk that way. He continues to do well. I can't tell you how relieved we are when he shows steady progress.
We're still waiting for him to poop now that he's getting milk. The nurses say that because he's taking in such a small amount, that there simply isn't much to pass through yet. BUT, they are upping his feeds today and will continue to do so slowly now unless they see problems.
I think Colby will get another eye exam either today or tomorrow. They're spacing out his ultrasounds to every couple weeks now, so I don't know when they'll do the next one.
Although Colby is bigger than he was, he's still very tiny. I'll need to get his latest length. He still isn't as long as my forearm and hand yet. We've had some new babies come into the NICU and compared to them Colby is small.
I've been in contact with a couple people who have had babies with grade 3 brain bleeds. Their babies are doing very well. Each one has mild issues, either minor cerebral palsy or delayed learning or something like that. But given what I've read on the internet and been warned about, their stories still give me hope. I know it's very early on but I continue to be so hopeful that our little boy will do well.
I'm starting to wonder if it's even possible to strike a balance with work, family and hospital while Colby is in the NICU. It seems lately like no matter where I focus, some other piece gets left behind a little. That's been difficult for me. I wonder if things are really out of balance or if we're simply beaten up a little from a long 2 1/2 months of trying to juggle things. The nurse remarked the other day that our stay in the NICU has already been longer than most. And we still have a good month or so ahead of us. And yes, we've heard over and over once Colby comes home, there will be new challenges. But I have to think that having him home will be good for us. No more daily travel to see him. We can spend much more time together as a family and start to make memories at home.
Tracey and I continue to be touched by the support and kindness show during our journey. Bev and Henry, thank you for the meals you dropped off ! Jamie and family, thank you for the bears and the blankets ! Those are special to us. Doug & Lori, Mary and Randy, Sue and Ron, thank you for the outfits. Thank you to Mary's friend who knitted his hats. I don't like naming names because I know I'll miss someone and I don't want anyone to feel like we don't recognize what they've done. Thank all of you for your support during our dinner. Thank all of you for your regular visits to the blog. It's neat to see the poll results. I'll change the poll about once a week. And thank all of you for your e-mails and comments. I look forward to logging on to read them. You have all made this journey much easier to bear. The in the title of today's blog sums it up. It's not that we're in the NICU, but that so many people are with us in thought and spirit that makes a difference to us. Thank you.
Posted by Scott at 6:15 AM

Juggling life is very difficult, while in the NICU...you just do what you have to do. Our view point was, in the end as long as our baby comes home who cares about anything else. If we don't have jobs, if we're 50K in debt, the most important thing was that we had Tyler, our family and our health.

We were the senior NICU baby for over a month and a half. It does get hard to watch baby after baby go home before you, but sooner or later you'll go home too :)

Keep up the great work. The holiday season is ahead of us, to add to the excitment will be having a "new" baby in the house. I love your new interactive blog :)

Being in the NICU is difficult, juggling work and home life. But, you pull strength out from somewhere, and do what needs to be done. OUr stay wasn't as long as yours, but I do understand what it is like to watch babies go home, or move up a room, and you are staying in the same place. But, your time will come, and then you are the ones getting the "I can't wait for the day" looks instead of giving them.

I actually voted a mother of a preemie and someone who cares... :)

You are so welcome!!! It is the least we can do. We just wanted to do something for your family, and try to make the NICU experience a little better. We also wanted you to have something to compare Colby to when he comes home, and is a little chunky monkey... :D Also, to have another way to remember your beautiful little girl, Avery.