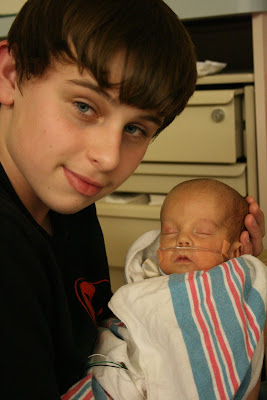 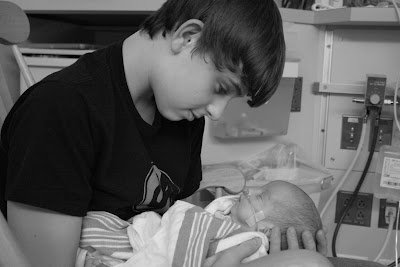 Not too much to report on the Colbster. He didn't pass his oxygen test yesterday. So they're going to wait another week and see how he does off the cannula again. Tracey and I were talking and we're not too sure if he'll be home for Christmas. The reason being is that they do this oxygen test once a week. And he needs to pass the test two weeks in a row. So we'll just have to wait and see.
He's not gaining weight quite as quickly as the doctors would like. But with all that he's been through with the surgery on his belly and lately the upset stomach, the doctors said it's not an issue. They just need to straighten out his belly issues and he'll probably start packing on the pounds. Colby continues to hover just below 5 pounds now.
Evan has been such a great big brother. He's very involved, asks about Colby each day and looks forward to going to visit him. I can see that when Colby comes home and as he grows, Evan will play a big role in his life which is great!
That's about it for today. I'm in the office and need to keep rolling here. I'll probably have more to write tomorrow.
Posted by Scott at 8:15 AM

Those pictures are so sweet!!! Evan looks so proud!!!

Well, they have sent babies home on oxygen before, so hopefully, if everything else gets better, he will still be able to come home. We will pray for you guys.