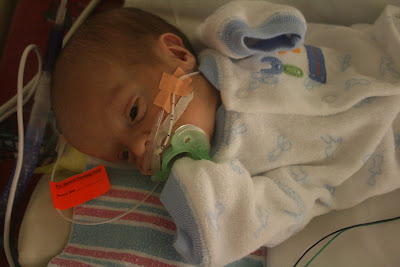 (Colby sometimes seems to hold his binky in his mouth. Every once in a while when I bring the binky to his mouth, he'll open wide as if he's ready for it. This shirt, as with all his other ones, was too big and I hadn't rolled up the sleeves yet. So he was holding his binky with his long sleeves on.) 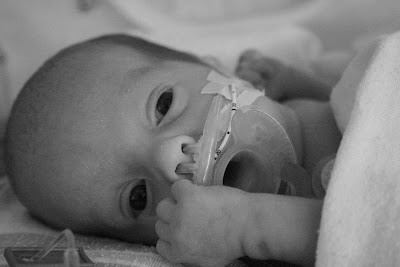 (Colby always seems to grab his cannula or his binky.) 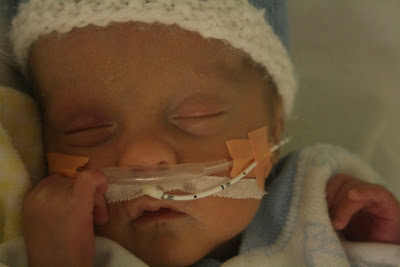 (Sleepy boy. You can see the tube in his nose. This goes to his belly and feeds him when he cannot take all his milk from the bottle)
I was a bit shocked when I went to the NICU last night. Colby wasn't in his spot. The place was empty. That certainly gets you thinking for a minute. I didn't think anything bad happened, but I wondered if they took him upstairs for a procedure. Or maybe he already went on to special care. I approached one of the nurses I know and asked "Ummmmmmm, where's Colby?". She smiled and pointed to the corner of the room. There he was, sound asleep. I guess they moved him to make room for some new babies that were coming in. I told him he's lucky now because he's got the corner office !!
He was doing well, continuing to take milk both with a small nipple from a bottle, and then he usually needs to finish the rest via the tube into his belly.
I feel good that Colby is showing so many "normal" signs. He is very alert. He can certainly see because he watches our hands, our faces and all that goes on around him. I'm pretty sure he can hear. But babies don't always respond when you talk with them anyway. So we'll have to wait and see more about that as time goes on. He reacts when I touch his hands, his feet, head or belly. So I'm glad to see that. We've been told that the more involved we are, the better Colby's outcome can be. It is very difficult having him35 minutes away, having to work and all. It's been about 2 and 1/2 months now of juggling home life and then the NICU. Sometimes it feels like less, and other times it feels a lot longer!
Last night I put him on a pillow on my lap. His feet towards me and his head near my knees. We were able to look at each other. I held his hands and did the whole "Paddy Cake" thing until I realized I didn't know how the song went. So we just make it up as we went along. Colby didn't mind though. He just laid there and watched. After a couple minutes, his eyes got heavy and he was out cold.
I sat there and thought about the past 2 1/2 months. I had looked at pictures earlier in the day of when Tracey was still pregnant, of Colby and Avery's first day and their first couple weeks. Amazing. Simply amazing that so much has happened. I fully understand that we're in no way out of the woods. And I realize that statistics say that Colby will have some issues. But I'm so very happy to see all that he's already doing, to see his progress and to see that he's a happy little boy.
I'm continue to be shocked by how many people follow Colby's story. I was at a school yesterday where I have many clients. I was actually sitting in their staff lounge when I heard I was going to have twins. So many of them followed our story well before Colby and Avery were born. So many of them came up to me yesterday to express their concern and show their support. That's simply wonderful. I know some of you read this blog so I thank you. It meant a lot to me to see all of you yesterday.
So many people have asked me how I can continue to write in this blog so regularly. Others have asked me simply why I started to put his story out there for everyone to see. And then why do you open up some of your personal life and hang it out on the Internet. It's to show the world what premature birth is all about. To allow people to read a bit about a family who is going through a very difficult time.....but is still doing well. And it's because of times like these....when Colby is doing well. It's good for people to see that even when times are tough, good things can happen. I've gotten comments and e-mails from people from all walks of life and from all over the country telling me that reading some part of Colby and Avery's story touched them. That in turn touches me. I know inside me that this blog isn't just for Colby. I get something out of it as well. The blog acts as an avenue to vent sometimes. It's a way to chronicle my son's journey. It's also a simple way to keep people who care informed about the latest events. But most of all, I get satisfaction knowing that the people who read this care. And once in a while people reading this have found hope about their own situation or realized that they in fact do have a lot to be happy about or thankful for. I hope that one day as Colby gets older, he will feel some sense of empowerment that his struggles and accomplishments helped others well before he was able to tell his story himself.
That's why I write in this blog.
Posted by Scott at 7:36 AM

Colby is looking so great!!! Thank you for sharing your story with us. I get up every morning and get on the blog, to see how little Colby is doing, and see how you and Tracey are. I also check it through out the day to see if there was another update. Some of the things Colby is going through, reminds us of when Maleia was in the NICU. We hope we can give some words of wisdom or support, during Colby's NICU stay. You and your family are in our prayers!!!

Scott,
I "met" you on myspace in a group and have followed your story since the day I read about PROM...I had just found out I was expecting twins and now that I have gone into early labor have had procedures to put off labor and am on nearly total bedrest I follow your story closer. I am a quiet listener and I take it all in! Fact of the matter is, you inspire me to remain hopeful and to have faith that things will be okay...hard maybe harder than I can wrap my brain around but we will get there...things will be okay and sometimes your blog is the only thing that reminds me of that! Thanks soooo much for writing your blog I appreciate it more than my words can express!

First and foremost, our thoughts are with you and your family and I hope this message finds you having a good day today! Know that you’re not alone. Know that this does happen to many people and technology and medical advances and all they can do for preemies now are just amazing!
If you feel comfortable, please send me an e-mail: scott4172@sbcglobal.net. I would like to be in contact with you. I’m certainly no doctor, but Tracey and I have been through a lot and I would love to be there for you in whatever way we can, if nothing more than to be able to sympathize with your current situation.
I hope you’re having a good day today and that I hear from you soon.
Scott

I just wanted to comment that we had the same thing happen to us one day in the UConn NICU! They moved our daughter during the overnight shift and didn't want to call us at 3 am to tell us. I walked in, saw the empty area and panicked!! Basically she was right behind me - whew.
Also, the blog is something you are going to read and re-read a thousand times. It relays information, it is cathartic and, eventually it will become the best scrapbook you could give to your son. I think even when no one visits mine anymore I'll keep typing just so the children will be able to read it when they're older and see how much they're loved!