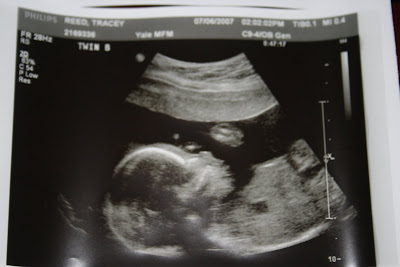 (picture of Colby's ultrasound)
Good morning everyone. Colby was doing awesome yesterday. Still just under 4 pounds. Tracey and I love watching him develop. He's moving his head a little to look left and right. Tracey and I held him for a good hour or so. He was very alert and content the entire time. He was at 2 cc's of milk every 4 hours right after his surgery. As of yesterday, he's up to 8 cc's every 3 hours! The eye doctor saw him again yesterday to check on his ROP. It's still the same. As long as it doesn't get any worse, we'll be happy. And one day hopefully it will get a little better.
I thought on days like today when I don't have too much to report, I'd look back to the e-mails I sent out before I created this blog and before our twins were born prematurely beautiful (see A.P. told you I'd steal your term, haha, I like that.....prematurely beautiful). Then I'd copy and paste some of them here. For those of you who don't know, we were on bed rest for 3 weeks. Tracey started at one hospital and was then transferred to UCONN once we were close to 24 weeks. Poor Tracey had a horrible time while on the magnesium to stop contractions. This was an e-mail from when we just got transferred to UCONN. We were 23 weeks pregnant and still gaining information about our situation.

"Things aren't looking good. After a good night's sleep last night, today has been filled with persistent contractions. One med didn't work, so we're back onto the Magnesium. The doctors are being cautious this time because last time Tracey had Magnesium, she ended up having to be put on oxygen, her blood pressure bottomed out around 60/30 and she could barely move. So we don't want that to happen again. But the contractions continue now through all the meds and with increasing doses of Magnesium.
The doctors are going to perform an amniocentesis where they are going to take a needle and take some of the amniotic fluid from each baby's sack to determine if there is an infection in Avery being that her sack has been broken now for almost a week. If there is, then the babies need to come immediately and that could be the reason for Tracey's body to try to expel them now.
We're being asked by the dr's what we want to do and we're at a loss. If we knew what the outcomes would for everything, we'd have a straight answer. But each options has it's challenges, risks and problems.
They've been kicking a lot today. maybe they somehow know that they're ready to come out. We're early and at this point, they wouldn't have had the chance to get their lung hormone shot, so it will be tough for them. They're big for their age, so hopefully that will help them.
The Dr's still say that hopefully they can stay in there for a while, but as the contractions keep coming, it's less and less likely.
As you can tell, we're worn out and beat up from today's events. And our outlook has been affected too. I expect tonight to be a long night and tomorrow to possibly be longer."
Posted by Scott at 5:25 AM

It's truely amazing to see where you've been and how far you've come.

Watching a baby grow outside the womb is fascinating...if only they could tell you the end result first :)

Thank you for sharing, I feel blessed to have been able to watch another little miracle grow :)