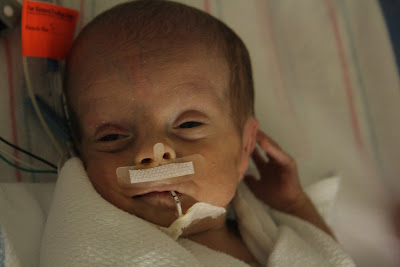 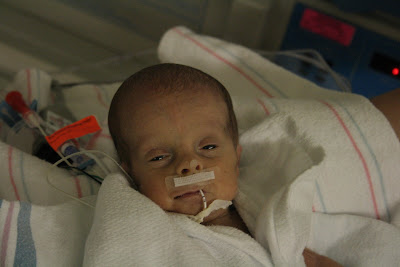 (I'm going to bring the camera into the hospital today and take some new pics of Colby. This one is from last week)
Well, we were told yesterday that Colby will most likely go for surgery this coming Tuesday. They're doing some tests on his lower intestine today to see what they are going to be up against as it's been inactive for over a month now. Colby's breathing has strengthened, his blood oxygen saturation levels seem to be more consistent then they were in weeks past, he's gained a little weight and he's 100% off of the steroid which could inhibit healing. So our little guy is just about as prepared as he could be for his next hurdle.
Tracey and I are a little nervous. I think part of it is that he's finally leveled off with his breathing and seems pretty stable. This surgery will set him back and that will be hard to see. We fully understand that if he comes out of it fine, then he will be even better. And to be honest, we're a little worried about him. He's still very tiny. I'm worried that the surgery could mess with his blood pressure, thus affecting his brain bleed and or hydrocephalus. And there's a laundry list of other things that could happen, just as with any surgery. But it's hard knowing he's already gone through so much. Focusing on these doesn't do any good. We know that Colby will be in good hands and we need to simply support him and send all the positive energy we can.
I saw a very moving show in TV the other day. Tracey is a big Oprah fan and depending on what the show is about, I sometimes watch it as well. This particular show had two people who had terminal cancer. They knew their time was short. One was a father of three, the other was a young married woman. Their stories were very touching but the whole message that both of them projected was simply to enjoy what you have today and make the best of today, because you never know what tomorrow will bring. Their stories touched me. I do my best to keep a positive outlook and not take things for granted. I do what I can to bring things into my life that support this way of thinking and I also try to limit the things that work against it. I've mentioned before that I'm a huge Dave Matthews fan (Tracey would certainly attest to this). I never liked him until I listened to his lyrics. Now, I can ( and do ) listen to him whenever I'm in the car. He lost his father at a young age. He has two sisters who he's very close to and one of his sisters was murdered. He's taken this otherwise really crappy situation and turned it into an eye opener and a catalyst to looking at things differently. He has a very good outlook on life and sings about enjoying the days that you have, being happy for what you've got and not taking things for granted.
I've already told Colby that he will one day be an avid Dave Matthews fan. Yup, the nurses laughed when they heard me, but that's OK. It's always good to be your own person. I'll bet those nurses are closet Dave fans anyway.
Posted by Scott at 10:38 AM

If Colby is half as strong as his parents, he'll pull through surgery just fine. Plus he has so many of us praying for him.

Another DMB in one house? I don't know...Poor Tracey!
Love to you all,
Vikki

Hi Scott,
Ok so I read your blogs daily..
I am a HUGH DMB fan and a myspace friend of Staci (DMB DIVA)...so anyway if thats a connection..
My husband and I have been going threw infertility for about 2 years so honestly your stories inspire me and thank you so much for that...
I had to finally "create an account" and comment on this little story...
Words (aka lyrics) are meant to be heard and understood, and I love that so many great DMB fans can get that...
So thank you for sharing your joy, sorrow and love...daily...
Your family inspires me..
Much Love
Katie
from VT