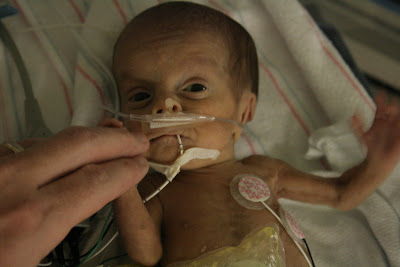 (Colby getting weighted. He squirms around like crazy when he's unwrapped and on the scale. So it was hard to get a decent picture. But it's nice to see him without his hat on.) 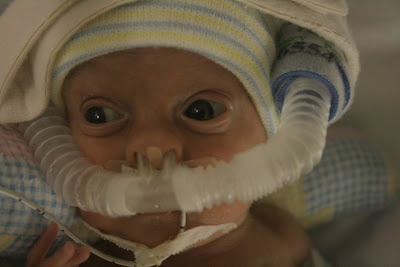 (And here he is when I left him last night....back on the CPAP, looking around) 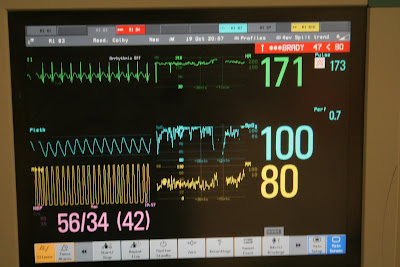 For those of you who have spent time in the NICU, the monitor above may bring back memories. It's the screen that displays Colby's stats. The green number in the top is his heart rate. Next number down, the blue number, is his blood oxygen saturation level. The yellow number is his respiratory rate. And down below, in purple is his blood pressure. He had just come off of the cannula and back onto the CPAP, so his levels were all elevated a bit. When any of the levels drop, the number blinks, a light on the top of the monitor flashes and a loud alarm goes off to alert the staff.

All the pictures were taken last night and Colby was doing very well. He was very alert and looked good. I held him for a little over and hour. Although he was tired, he fought to stay awake. Towards the end of the hour, he was day dreaming and his eyes were getting heavy. As I put him back in the incubator, the nurse did her workup on him, taking measurements and weights. It looked like he gained a little weight yesterday. If he can put on some weight before he goes into surgery, that will do him well.

As I'm typing this, Tracey and I are sitting here, having our morning coffee and watching Babies: Special Delivery on the Discovery Channel. This show chronicles the delivery of babies which for one reason or another, are having a difficult birth. Just about all of these babies are then sent to the NICU. It's funny because although all of the babies on this show are preemies, many of them are pretty far along, say about 34 weeks or more. And although they're on the smaller side, about 4-6 pounds, they all seem huge compared to Colby and Avery. It just goes to show you how different everyone's situation is. We feel like we could be consultants to these folks. Even though these people are in a situation they never asked for, they probably have no idea of how lucky they still are. To have made it to 34 weeks gestation and to be weighing in at 4 or 5 pounds is a darn good thing. It just puts things in perspective that you always need to be thankful for that which you do have. Even when times are tough, take a minute to stop and see what is going right, what is better than yesterday and what you have to look forward to.

I wouldn't change anything in our situation. No use in second guessing anyway. It's all water under the bridge you we can't change that. We can only affect elements of our future.

You won't get any updates for a day or two. I'm heading up to Maine. I need to relax and get my legs back under me a bit. I have pictures and memories for as far back as I can remember of being at "camp" (that's what they call a cottage up there). My grandparents retired up there. I've been going up since I was born. Evan has been going up there with me now for as long as he can remember. And one day I'll be able to bring the forth generation of the Reed family to Sebec. That will be a very good day!

I'll wrap up with a funny little story. A funny little story. Colby has a colostomy bag right now. I was holding him the other night and he made a face, then I hear a little "brrrrrrttt". I wondered what the hell that was, but shrugged it off. Then, last night the same thing. Colby stops looking around, he gets focused, makes a little face and "brrrrrrrrrt". After thinking about his situation a little, I called a nurse over. She laughed and said that Colby was having gas. Sure enough, I looked under the blankets and his bag was filled with air! Huh....I never really thought about it but if you take in air....it's got to get out somewhere. And in his case, that somewhere right now is his colostomy bag. Makes sense.

Yah, for taking a time out!!! We head to New England on Friday, I can't wait.

I loved the baby shows, up until my twins were born. Now it all seems boring and extremely exagerated. They never do show the micropreemie, not really sure why.

Colby looks so super fantastic, with such bright eyes.

Have a great few days.

Colby is looking great!!! It's good to get away, take time to relax.

I found this site using [url=http://google.com]google.com[/url] And i want to thank you for your work. You have done really very good site. Great work, great site! Thank you!

Who knows where to download XRumer 5.0 Palladium?
Help, please. All recommend this program to effectively advertise on the Internet, this is the best program!