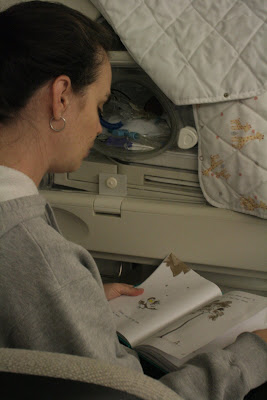 (Tracey reading a book to Colby. He opens his eyes and watches her out the hole of his incubator as she reads to him.)
The last couple days have been rough on Colby as well as for Tracey and I. We have been in a bit of a funk seeing our boy look so sick and not really getting much insight into his condition. He's been needing a blood transfusion but believe it or not, the machine that cleanses the blood had been broken. We've also been worried about his brain bleed and wanting to know more about what's happening now that they've done another ultrasound. They gave us a general "nothing new on the ultrasound today", but we wanted more information.
As I've said over and over again, things can change. And they finally have. Tracey asked to speak with the doctors this morning in more depth and learned a bit more about Colby's condition. He's finally getting a transfusion today. That will help him with his energy and all. They've taken him off his antibiotics because he seems to be in the clear for now. They continue to up his feedings. Most importantly to Tracey and I, his head seems to be about the same. That isn't anything new, but after Tracey spoke with the doctor she's learned that his bleeding is relatively small. The growth of his head seems to be more of a natural growth with a bit if hydrocephalus. We have been wondering about the impact all of this can have on Colby's brain and the doctor shared that he thinks it's on the lesser side.....for now. That's the best news we can ask for. We understand that it's not a promise and that things can change, but we just didn't know and were worried and wondering about where we stood today. They said that the ultrasounds are a much better barometer for his condition than his head circumference. The latest ultrasounds haven't showed any worsening and gave them a good view of what has taken place. They said that his current situation is about 1/5th of what Avery had. Even just typing that statement sends a bit of a chill through me and feels as if my shoulders are lifted a bit. hmmm...maybe I should type it again....
Hope. That's what helps us get from day to day. And today we were given a good dose of it.
I'm heading to an appointment but will then go to see my little boy this evening. I simply CAN'T WAIT to see him today !!!!! ....and I'll bring the camera so we'll have some new pics up tomorrow.
Posted by Scott at 1:04 PM

Reading to Colby is so awesome. I got a big smile when I read that he looks over at Tracy while she's reading.

I know that it will continue to be rollercoaster ride the next couple of months but there is so much hope for Colby. The fact that his feedings have been uped, the brain bleed hasn't gotten worse, and the transfusion are all wonderful things!

My mother and I read to my son Kameron every day that he was in the NICU. The nurses did not know what to make of us reading to him. One nurse had never see anyone read to a baby in the NICU. Now at 2 years old he loves to be read to and loves to look at the pics in his book. Take care and my prays with by with you and your family.