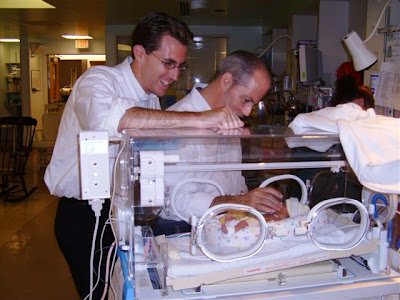 Yet again I'm sorry for the delayed updates. My days are spent working and my nights are in the hospital. By the time I get home, I just want to go to bed. I can't wait for the days when I'll simply come home to see my son.
The last couple days have continued to go well for Colby. His ultrasound came back with no real change. We don't want to see it get any worse so we're glad to hear that news. He's now on a cannula for two hours a day and will increase his time on that little by little to get him off the CPAP. They've discontinued his feeding via IV's and is now fed only by a tube that doesn't down into his stomach. Hopefully in a couple weeks, he'll be able to try to bottle and breast feed. He's graduated into a different incubator now that he's a little bigger and isn't needing as much support. It's still enclosed on him, but it just doesn't have all the bells and whistles that his old one did.
All of this just goes to show us that during the hard times, just keep your head up and over time, things will get better. Sometimes it does take some time. In our case.....almost three months after we were first admitted to the hospital.
Colby will still need to have another surgery to put his intestines back together and put everything back into his belly. He'll need to have a thick IV that's currently surgically inserted into his leg and goes up into his chest removed. His lungs are damaged from all he's gone through and they'll need to get back on track. His brain bleed will most likely have some affects which we won't realize until down the road. But given the strength that he's demonstrated thus far and the expertise of the NICU staff, we're keeping our fingers crossed and hoping he'll do well through these challenges.
Colby has now met his grandparents. Above is a picture of my dad, myself and Colby taken the other night. I got to give him a bath that evening. I've also done my best to change his diaper. That didn't turn out so well, but I'm learning.
Tracey and I realized our video camera is a digital video camera. We're going to take some video and do our best to upload it. That will probably be done over the weekend.
Posted by Scott at 6:02 AM

That picture is so precious I love it!!!

I am glad to hear Colby is doing great!!!

No worries Scott, you'll have PLENTY of time to perfect your diaper changing skills! =)

I love the shot of you and Jud. Have a great weekend.