Round and round they go 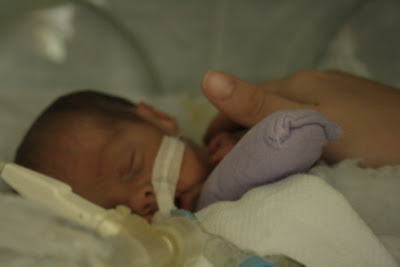 I have some time between appointments this morning, so I wanted to get an update out.
Tracey and I went to see Colby last night. Our little boy is having a tough time. Although I can't really describe it really, he just didn't look well. His color was poor. The doctors said that his blood pressure was low. His oxygen saturation and heart rate kept dipping too. When they pricked his heal and squeezed out blood to do his blood work Colby didn't twitch or move at all. He just laid there and that really bothered me. They are doing some tests to try to determine what's going on.
There's some positive news though. They started his feedings again and he's back up to 3 cc's of breast milk and hour. Thus far, he's digesting that OK. Also, his ultrasound came back with no change. We always hope to hear that thing are getting better. But no change also means his brain bleed isn't getting worse. I think his hydrocephalus keeps getting worse though. His head circumference continues to grow. Yes part of that could simply be normal growth, but at times it's more than 1/4 centimeter a day. The back of his head look really big lately. I feel so helpless looking into his incubator. I need to believe that he's in good hands and things will turn out as they're supposed to.
Thus far, we've been very pleased with the NICU staff. Last night was the one exception. The nurse he had just turned me off in the first minute I met her. She seemed totally disinterested in Colby's condition and didn't offer much insight into his situation. She's never had Colby before and hopefully she won't have him again. If so, I think I'll speak up and ask for another nurse.
The doctors have changed too. Every two weeks, the doctors rotate around from one area of the NICU to another. We've been very lucky to have an absolutely wonderful doctor, Dr Casey, for the past two weeks. He's just the kinda guy that you feel really cares, he does a wonderful job conveying information and is very personable. All around just a great guy. We're counting the days until he rotates back around and we have him again.
Tracey had her first day back at work yesterday. She's happy to be working again. These past couple days have been rough on us with Colby's condition seemingly worsening. We try very hard to keep a good outlook, but at times we just wear out. So we keep enjoying the positive things....he's getting breast milk again, his brain bleed isn't any worse....and we move on knowing that tomorrow will be another day and things will always change if you give them enough time.
Posted by Scott at 9:46 AM

I completely understand about the NICU nurses and doctors. We had some nurses that we just didn't like at all, and then we had the ones that we just loved!!! Although our Doctors never changed, which we were very happy about. We are glad to hear that Colby is back on breast milk... that is the absolute best thing for him. Also that his brain bleed isn't getting worse... YAY!!! :)

We are still praying for your little man and your family!!!