A Trip to Maine, a trip to the ER and a broken window

We had a wonderful time up in Maine....always do. The weather was just beautiful, the water was relatively warm, the fish were biting.....and so were the bugs.


In the past week or so Colby started squinting his eyes. At first we thought he didn't like the light. Then we just thought it was just an odd thing he was doing. After a bit, we noticed when he squinted that his eyes would roll either down and to the right or just straight down. And they'd go so far that you can barely see the color of his eyes. On the trip up, he was doing it a lot and we started to get concerned. A malfunctioning shunt can cause the person to do something called sunsetting where their eyes go straight downward. Also, people with brain bleeds can have seizures. We weren't sure what was happening with our little boy so when we were up in Maine we called Colby's neurosurgeon. After a brief discussion, he suggested we bring him to the hospital in Bangor to get a CAT scan. Our concern was that his shunt was failing. So we packed some overnight clothes in the event he was admitted and headed off for the hour plus trip to Bangor. I was quickly thinking through all the Plan B's if Colby was to be admitted up in Maine. I thought of how we'd get the rest of the family home who all came up with us in the minivan. How to let them enjoy the rest of the vacation, what about work and my upcoming appointments. And Tracey's work..... Long story short, his CAT scan showed his shunt seems to be working wonderfully. His ventricles are really small which means the shunt is draining things well. However, having ruled the shunt malfunction out, this now points towards seizures. When Colby is doing his eye thing, the rest of his body moves fine. He doesn't stop whatever it is he's doing. But you can lift his eye lid up and his eye is straight down. You clap your hands or do anything and his eyes won't come up until they're ready. Each episode lasts only 1-4 seconds, but at times it's one after another for a minute or so. And then he'll go hours without doing it, then maybe just one or two here and there. We do find that if he's concentrating on something, he doesn't seem to do it.


We followed up with the Neurosurgeon after we got the results of his CAT scan and now have a follow up appt on Tuesday. We've been doing a lot of research online about seizures and I guess they're not as devastating as I thought. At least if these do turn out to be seizures and if they limit themselves to what he's doing now, it will probably be manageable. Well just need to tackle this next hurdle and keep moving along.


Apart from that the only bit of drama was the morning we were leaving. Everyone was up at the house packing. I brought the minivan down to the shore to put the fishing stuff, snorkels and masks and the tube we use for tubing into the van and drive it up to the house to put it away. Everything fit in the van fine, but I thought I had a brilliant idea to put the tube on the roof of the minivan. The drive up the driveway to the house was short. I wouldn't have to deflate the thing....sounded just great! So I picked the tube up and threw it up onto the roof of the van. Just as it hit the roof I heard what sounded like a POP then something like little stones running down the side of the van. Evan was putting his fishing stuff in the back of the van when this happened and I heard him say "What !!! Ow my god !!" Turns out the thick plastic part of the tube where you attach the tow rope had gone over the far side of the van and hit the back left window just right to totally shatter it into a million little pieces. I walked around the other side to find little pieces of black glass all on the ground and worse yet....all in the back of the minivan. "hmmm, " I thought "this will delay us getting on the road!" I had to drive to town (about 1/2 hour away), spend about $10 on those quarter operated vacuum machines to get all the glass out of the van then buy some plexiglass and a boatload of duct tape to make a make-shift window that would withstand a 7 hour drive home.


We'll just chalk them both up as part of the adventure.


On a more positive note, Colby has been doing absolutely wonderful with his motor skills and with sitting up. His hand movements are very deliberate and precise. He'll take his binky out of his mouth, look at it, turn it around a bit and try to put it back into his mouth. He'll also reach right for something that he's interested in.


Just a couple weeks ago, we were trying to get him to sit up on his own. But he didn't want anything to do with it. He's simply fall over and cry. Now, if you have him on your lap, leaning against you, he'll pull himself upright and seems to prefer to sit upright rather than leaning back on something.


I've been watching him today as Tracey had to work. He's been very vocal and playful all day. I love to see him grow and progress !!!


Below are some pics from our trip. 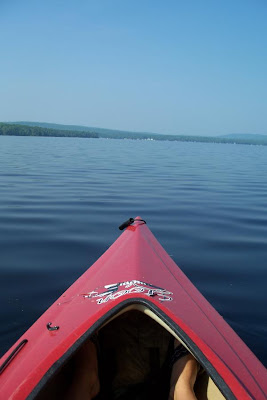 Amie on the lake in a kayak with coffee in the early morning....life is good. 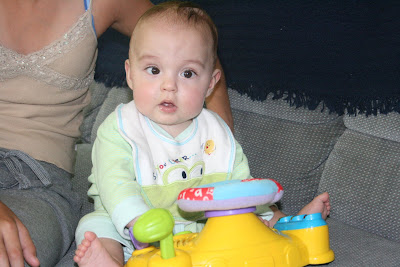 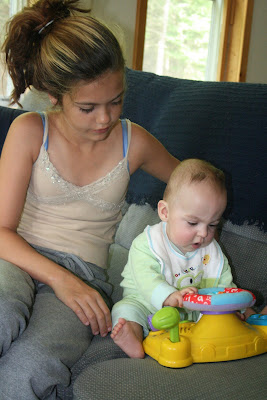 My niece, Gabrielle, with Colby. You can see how well he sits up. We got him this little driving tow thing and he loves it! 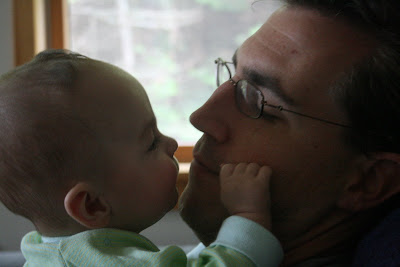 Colby and Daddy in the morning. (Great picture honey) 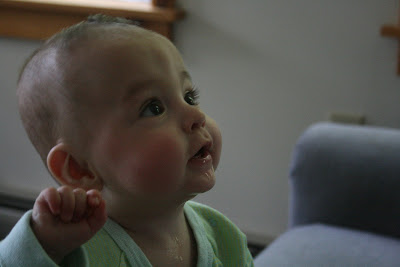 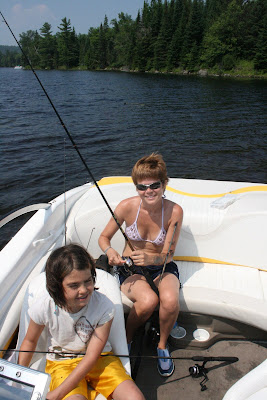 The lake is about 15 miles long and at one end there's an awesome cove. It's pretty much a private pond. There's only two camps within this cove. It has a huge river running into it. The cove is pretty shallow so we go in, trim the engine up and pull the boat onto shore. We then walk along the shore or up the river. I brought my two nieces, Gabrielle and Alexis, my sister in law Aime and Evan up there for a couple hours on this day. 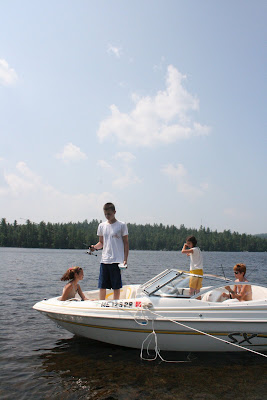 Everyone getting their fishing rods in order before we hop of the boat. 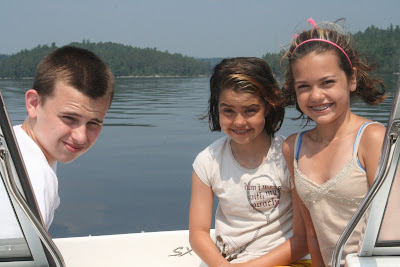 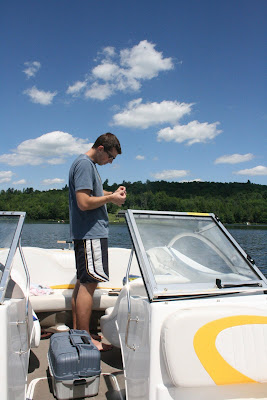 Our friends Dave and Nikki were able to come up for a couple days. Here's Davey getting ready to hook a big one! 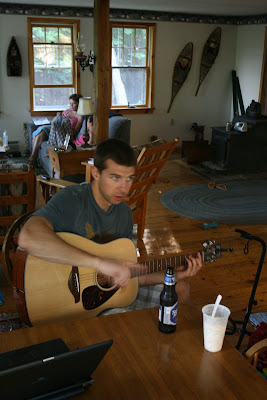 Dave giving Evan some pointers on the guitar in camp. 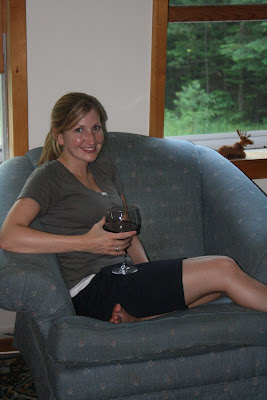 Nikki looking quite happy to have a glass of wine in her hand. 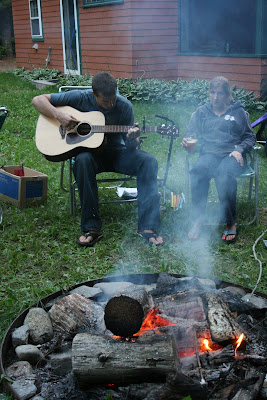 Dave playing some Dave Matthews out at the fire one night. Nice job Davey !! 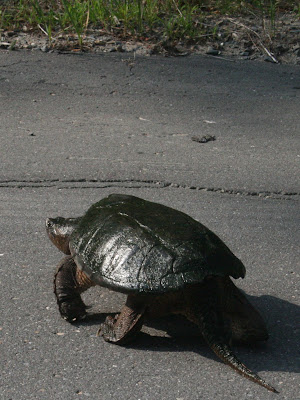 Some wildlife....a big snapping turtle crossing the road. There's all kinds of stuff up there. There's often at least one pair of bald eagles up there each summer. Foxes, coyotes, deer, moose, black bear....you name it...it's probably in the woods up there. 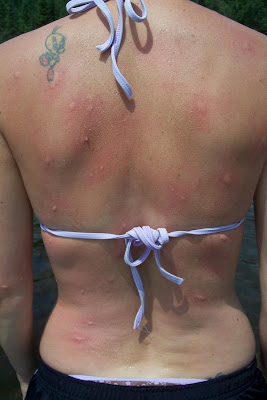 Ahhh yes. Mosquitoes really suck! Remember that cove I brought them to? Well, you have to get out of the boat and to into the woods on the shore to make your way up the river. The mosquitoes, black flies and horseflies were horrible. Poor Amie just had her bathing suite top on. She had to turn back about 1/4 of the way up the river. I can't imagine what her back would have looked like if she kept going!