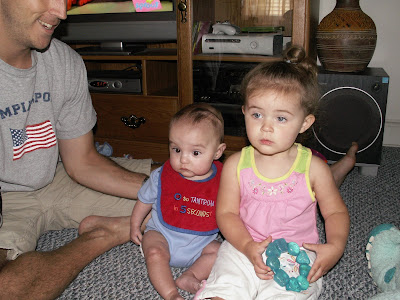 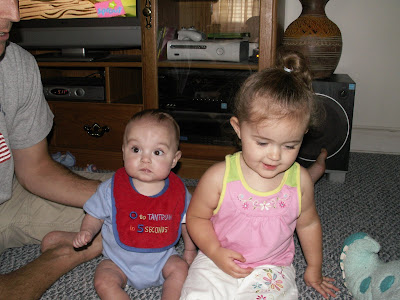 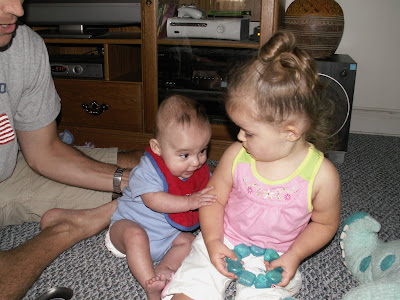 (Colby says "Wow Hannah, I just LOVE your arm!!!! So...beautiful!" Hannah was awesome with him...very patient and like playing with his toys. Thank you for having us over, Randy, Mary and Hannah

I mentioned a couple weeks back that we went to visit my cousin Randy and Mary and their little cutie Hannah. Here are some pics from that visit. Thanks for sending them along Mary !
Still no word from the doctors about Colby's EEG. We've been plenty patient. Starting today we're going to start bugging them to get things rolling more quickly. We hate to see Colby having the seizures. They're certainly not as bad as some seizures can be, but it's still affecting our little boy and we want to address it. Whenever we're trying to work with Colby, be it helping him grab things, push up from his belly....anything, he has the seizures. I have to think that if you or I were trying to concentrate on something and our eyes kept rolling to the bottom of our heads that it would distract and affect us. Having said this though, Colby is a very happy and content little boy. The seizures don't seem to bother him one bit and that's a good thing.
Thank you "A" for sending the suggestion about using a towel to help Colby lift his body up. I bought that roller thing I was telling you about last week, but it's bigger than Colby's whole body. However, if I roll up a both towel it fits perfectly......now we just have to keep working with the Colbster! LOL He's getting stronger and can certainly push himself up. But he'd almost prefer to lay his little head down and suck on his fingers. All in time....
Thank you guys for your comments !!!! I love reading them and to hear feedback. I can see from the counter that plenty of people are looking at his blog, but I have no clue who everyone is. So keep the comments coming.
Colby has a relatively busy day today. I have to work but Tracey has arranged to go see a puppet show with him and then to a kid's sing along thing. She's wonderful with planning things to do both with Evan and now with Colby. I'm more of a "wake up in the morning and figure out what the hell we're going to do today" kinda guy. Yup, drives her nuts sometimes but hey, we're each our own person and that's what relationships are all about.
I've been sitting on the couch at home, doing some work and nibbling away at this posting for well over 45 minutes now. All along Colby has been in his jumper just as happy as can be. Trying to figure out what all the little toys are around him and making all kinds of sounds. Some sounds he makes just with his mouth and others with half of his hand in his mouth and you get a slimy raspberry sound. I can't wait for the day when he starts to talk!
Posted by Scott at 8:14 AM

Well, I hope you get some answers soon. He looked like he had a fun time with Ms. Hannah. We will be praying for you guys!!!