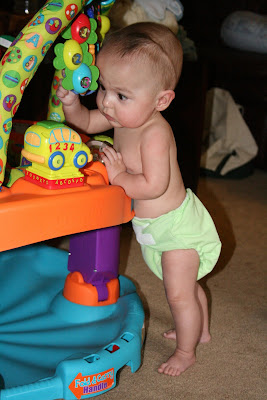 ( Colby wants to stand and he can just barely hold himself up by himself now.)

Colby's EEG is done. We now just have to wait about a week for the doctor to call us with the results. It's amazing how things take so long....first to get an appointment, then to get the results...and then there will probably be yet another wait to determine our course of action to hopefully stop his seizures.
I've gotten a couple e-mails from people asking about his seizures. Does it hurt him? Will they have any long term affects? What are they from?
I don't have all the answers but I'll do my best to address the questions. Do the seizures seem to bother or hurt Colby. Not at all. It seems to be more of a nuisance than anything. If he's playing with a toy and it happens, his hands continue to play with the toy, he'll still laugh or do raspberries, but because his eyes have dropped down he can't see what's happening. You can tell it frustrates him sometimes. Some of his seizures are really quick....just a second or two. Other times they're more consistent, just one after another or they'll last a good 10 seconds or more. That's when it's hard for us to interact with him and hard for him to focus on anything.
At least thus far, they've been solely in his eyes and face. Sometimes it seems to pull his neck and head to one side (usually the side his eyes are turning to). So we're happy that at least for now, it's not spreading to other parts of his body.
Will the seizures have any long term affects? I don't think so. We asked his neurosurgeon about this when we met with him last week and he said it's more the seizures that last hours or incorporate the entire body that at times can affect the person down the road. I don't know if that means it affects the brain or the body and muscles. Hopefully I'll never need to learn those details.
What is causing his seizures? Again, I'm not certain. I guess the root cause is either because he had a grade 3 brain bleed which has traumatised parts of his brain. Or it could be from when his ventricles were so enlarged from his hydrocephalus that it pressed his brain against his skull for a prolonged period and may have damaged something. Or I also wonder if it could be from the two surgeries he's had on his head. In each one the doctor went right through parts of his brain. The areas affected would be small, but you're still disrupting the brain. So I'm not totally sure. I guess the EEG will in some way tell the doctors what part of the brain the seizures are coming from and that in turn may tell us what is causing them. At least that's our hope.
Apart from this, Colby is doing so well. We continue to try to help him with his upper body strength and his tummy time. I can't say that he's liking is tummy time any more than before, but he does seem to be holding himself up a bit better. I'm on a mission today to find a roller. I was reading online about how to help your baby start to crawl and there were a couple articles that talked about using a roller. I guess it's an inflatable cylinder that you put under the baby's chest/belly which helps support their body weight while getting them used to having their arms and legs beneath them. While we're out I may try to swing by the NICU. I enjoy visiting there. The people there became like family as we would see them every day, sometimes for hours at a time. And they had such a huge impact on Colby and our family.
Then this afternoon it's crawling bootcamp for the Colbster. LOL It's funny because if he's on his back, he'll push himself around a bit with his legs. Almost like he's crawling, but on his back. Or he'll lift his legs, arms and head up toward the ceiling, trying to move himself around. So the interest to get moving is there, but he just doesn't get how to do it. I want to capitalize on his interest to get around and help our boy crawl!!!
Colby is also gaining some more weight. He seems to go in spurts, both in development as with everything else. He's had a renewed appetite lately and is starting to take 4 bottles a day along with his fruit and cereal versus his usual 3 bottles.
He's taking nap now so I'm going to try to do a little work while things are quite!
Posted by Scott at 8:01 AM

Love all the new Colby picture's :) We just loved having you guys over.
Love, Mary and Hannah

I'm glad things are rolling along. Hopefully the results will come quick.
Tyler army crawled sometime around his first birthday and walked before ever trying to do the "up on all four" crawl. Addie (16 mths) is moments from walking and hasn't crawled a day in her life...she's a scooter...it's crazy the speed she gets. Our pediatrician said if their moving and getting somewhere, then their crawling. As long as they can get what there after who cares how they get there.
If you can get Colby up on all four (and still support him), sing to him (something like row row row your boat), he may rock back and forth...Tyler used to love to :) Take care and have a great weekend.

He looks great!!! He stands better than Maleia does!!! Let me know were you find the roller thing, Maleia is not crawling yet but is commando-crawling, and is pretty fast.