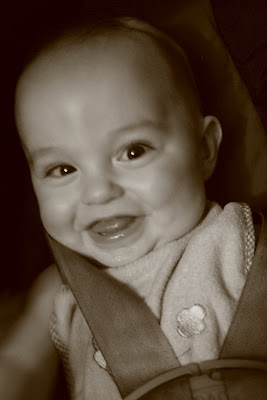 (taken this past weekend)

Well, we saw the neurosurgeon today. We thought that Colby may not do his "eye thing" while the doctor was looking at him so we brought a video tape of him that we'd recorded in the last couple days. Sure enough, Colby didn't do it when the doctor was in the room. So we showed him the video. He said it did look like a seizure, but to be 100% sure, he is ordering an EEG to be done on Colby in the coming weeks. He also recommended we see a neurologist once we get the results. Connecticut Children's Medical Center is apparently short on neurologists right now so the doctor said that if we can't get to see one there, he would refer us elsewhere. He said that most seizures can be managed with medication, so that's a good thing. I've heard kids will outgrow certain seizures sometimes....so we'll hope for that.
Although we had been hoping Colby's eye thing wasn't a seizure, we knew in the back of our minds that it was a good possibility. We were a bit bummed to hear this news, but there's nothing we can do to change it.
So that was the first bit of not so good news we got today.
Then, as the doctor was looking at the CAT scan that Colby got while we were in Maine, he was showing us how his ventricles had gone back pretty much to normal size. That made me feel good. While we were at UCONN, they had told us about something called PVL. PVL are areas of the brain that die due to lack of blood flow. Once that area dies, that's it for that particular portion of the brain. I'ts possible for other areas can rewire themselves to compensate. I mentioned to the doctor that as least Colby has made it through all of this without having any PVL. The doctor pointed to the screen and said "Colby has some PVL in this area here." That was like a punch in the gut. We'd been going through all of this feeling "lucky" that Colby didn't have any PVL...... His PVL is most likely as a result of his brain bleed. I guess in the big picture it doesn't change anything. He had it yesterday, maybe for weeks or months now, but we were under the impression that all his brain matter was in good condition. As I thought about it on the ride home, I kicked myself for not asking how much PVL Colby has, exactly where it was, etc. But when he told us I was a bit numb and was trying to digest what I had just heard. The questions didn't start bubbling up until later. Those questions will need to wait until next time we see the doctor.
That was the second thing.
Lastly when the doctor was assessing Colby's progress he mentioned that developmental he's at about 5 months because Colby doesn't push himself up while he's on his belly. Now he's not a pediatrician or developementalist, he's a neurosurgeon. So although he knows his stuff about the brain and all, I don't think we should listen much to his assessment on Colby's development. Colby is sitting up well, his motor skills are progressing. His judgement was based solely on Colby not pushing himself up. Having said all this, I shouldn't have let this bother me, but given the other news we'd gotten thus far today, that was just the last straw. I really felt beat up inside..... a bit empty.
Having said all this, the doctor has been absolutely wonderful and I don't mean to in any way speak negatively of him. It's more the news that we got that hit me today.
As Tracey and I left the doctor's room, pushing Colby in his stroller ahead of us, we asked each other how we were doing and we both had the same response ..."OK"....but our faces said something different.
We're just in a bit of shock I guess. Things have been going so well. We just want Colby to get to some point where we can start ruling things out....not adding more questions and hurdles to his future. The reality of it all though is that he was born very premature, he had a grade 3 brain bleed, hydrocephalus and now PVL. We need to digest this, accept it and focus on what we can do to help our boy.
Both Tracey and I had to head right to work after our appointment. On my way home I stopped at Wal-Mart to pick up some more small toys in an attempt to give Colby something new. Something that would interest him and make him want to use his hands, his brain, etc. Not like he really needs more toys, but I just want to stimulate him as much as we can.
My mom comes over to help us on Tuesdays. Tracey works in the afternoon and I usually have appointments. If I have evening appointments I usually don't care if my mom puts Colby down in his crib. But tonight I wanted to see him so I called my mom ask asked that if he wasn't totally tired and cranky, that she keep him up so I could see him. When I came home, I could hear my mom playing with him in his room. I heard him laughing and squealing away. I looked in to see him happy as could be. That somehow made today's news a little easier to manage.
Tomorrow morning Birth to Three is coming. We've got some questions lined up for them. Not sure how many answers they'll have. But we have to ask what we can do. My questions are always around the other kids they've seen with conditions similar to Colby's.
So, that's the scoop from today. Sorry for being a bit down. Tomorrow's a new day.
Posted by Scott at 8:58 PM

That is a ton of stuff to digest in a short time. I'm sorry you guys have to go through this. But, when the day is over, Colby is still perfect. Even if PVL is present so far he hasn't shown indicators that things aren't working the way they should be. Little brains are truely amazing. As for the neurologist and developmental assessment, hhhhmmmmmmm, some of my friends like to give judgement of my kids development (ie: "wow...she not walking yet??, don't feel bad"...I don't)...not always accurate. So he doesn't push up on his belly...is there something saying that he never will...he will and when he does we'll all wonder what the worry was. The wait for "normal"...is a long one...it's been three years...I'm still waiting :) Hopefully, you'll get some of your questions answered. One thing is sure, Colby picked the best parents that a little guy could have. Your both inspirational, take care.

What a week you are having! We are still out here thinking and praying for you and your family. Colby will be fine. If he is anything like my 30 weeker you will get discouraged today because they say something that your child is behind in. Then when you wake up the next day they are doing whatever it was. Lauren was like "Hey I can do that I just did not feel like it for you!" As for the medical issues it is a lot to digest. But he really has come a long way and I truely believe that he still has a long way to go. Like the previous comment says little brains are amazing! Keep up the great work with him and keep up your chin. Good luck!

Your friends in Delta, Ohio!

I'm so sorry for the bit of a let down you are feeling right now. Like you said, you feel that Colby is doing really well and I think that parents are one of the best measurements of a childs progress. You are the one that spends every day with him and has seen his progression, not the doctor.I don't know anything about brain bleeds or PVL, but is it possible that his PVL is in a place that isn't really needed...we don't use all of our brain and most people don't even use as much as they should...ok..bad joke! I got teary eyed picturing Colby in his room playing and squealing! He is truly such a precious baby! You and Tracy are doing an amazing job!

Hi Scott, I just found your blog via Lost and Found and wanted to say that I find Colby and Avery's stories to be incredibly inspirational and moving. Your children are beautiful and Colby is the cutest little boy - his face is absolutely radiant! You are amazing parents and I can't thank you enough for sharing the love you have for your children. My thoughts and prayers are with you all!