Backyard Wildlife and an appointment with the Neurologist 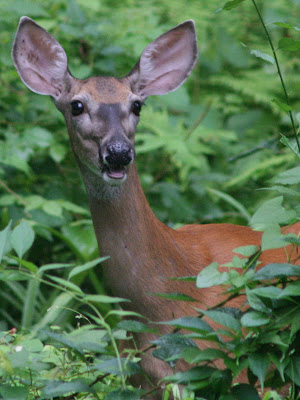 (The doe was actually chewing in this picture but it looks like she's talking or surprised at something.) 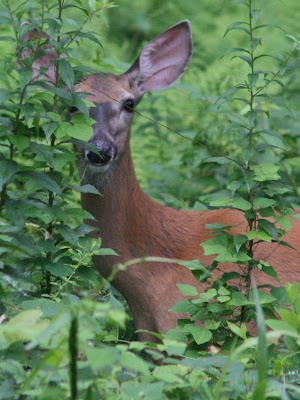 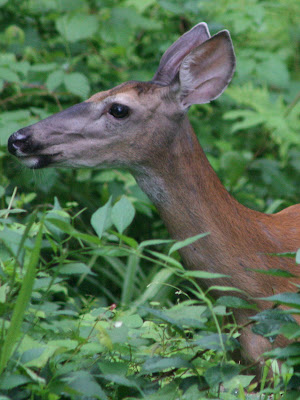 I know that for many people, seeing a deer isn't all that interesting. But I know there's a number of people with kids who follow the blog and also some people from areas where there just aren't deer wandering all over the place. So this morning when I saw a deer in our back yard, I figured I'd snap a couple shots and post them.
As I mentioned in the earlier post, we were going to pressure the doctors to move forward with seeing and hopefully treating Colby's seizures. At first Yale said they didn't get the fax from Colby's Neurosurgeon. So they refaxed it, and refaxed it and still Yale says "nope, didn't get anything." Well, Tracey apparently let them know a little about how she felt and miraculously, they found the fax to get Colby referred to Yale. They said they'd call back and let us know when we could bring him. A little bit later and Tracey called me in the office to say Yale could see him........on January 8th, 2009! Can you believe it!?? That just seems totally screwy!!!! Tracey then called the neurosurgeon and told him a little about how she felt and we now have an appointment NEXT WEEK (though we don't yet know the day) right at CCMC. The whole medical system drives me absolutely nuts sometimes.
So, it's a step in the right direction. Once we get more specific information, i.e. the day and time, I'll let everyone know.
Posted by Scott at 4:49 PM

Yah, for women with authority :) I don't doubt doctor's intelligence, but sometimes they're not so good at standing in the shoes of their patients. That's great that you don't have to go all the way to Yale. All of Colby's videos are so cute, but I love the photo grabbing Hannah's arm, the mind of the baby is often comical. Have a great weekend.

Way to go Tracy for parent advocacy! Yes the medical field has a tendancy to make people feel like they're going crazy. I also love the photo's of Colby with Hannah. He's looking at her arm like it's the greatest toy ever.

Good job Tracey!!! People seem to listen once Mommy gets mad... :) That is awesome, but hopefully they don't give you guys the run around again!!!