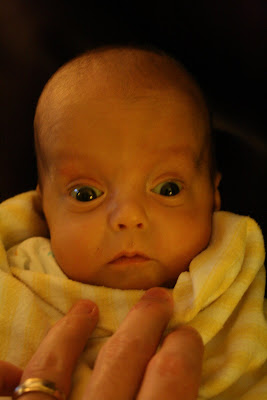 Colby had a bit of a tough day today. He was pretty fussy as his belly continues to hurt him. I have been feeling his belly to see if it gets hard or if there are any hard areas and as best I can tell, everything is soft. He had a massive poop this morning. While I was changing him I had my first experience of what seemed to be more poop ending up in my hand than in the diaper. Uuugggghhhhh. Nasty stuff. But it's all part of the deal.
The visiting nurse is coming tomorrow and we're going to ask her about his belly. I feel that it's just a case of an irritable belly and just time will take it's course. But it's good to have someone keep an eye on it being that he's had belly surgery. The nurse weighs him and I'm anxious to see how much weight he's gained.

Thank you for your ideas about getting help with the Pregestamil. We're going to look into both avenues. I was surprised today when I was in Babies R Us that they didn't carry it there. Huh...

This week Colby has a follow up with the neurosurgeon. We've been feeling his soft spots on his head and they continue to feel soft and "empty". When his hydrocephalus was progressing, the soft spots felt firm and full. Almost like a blister would. I'm not sure what the doctor is going to do on Wednesday, I'm assuming an ultrasound to check if there's been any change over the past week.


Colby's room is coming together. We've got the Crib and changing table. And today I ordered his dresser. That should arrive at Baby's R Us in a week or two.


Some of you have asked how Hamilton is doing. Well....he's pretty bummed. He's been moping around and when he lies down, he's been letting out a deep groan as he lowers his body. So we've been doing what we can to give him some more attention today and he's loving it!


My week coming up is relatively slow work-wise given that New Years falls on Tuesday. That's a good thing as it's been quite an adjustment for Tracey and I. I think between the lack of sleep and change of sleep routine, plus we went from 5 months in the hospital, to then sleeping in the hospital and trying to square away a little bit of Xmas shopping, to having him home. One after the other. So we think it might take a couple days....maybe a week to get settled in.


I know there are a good number of you who read this blog who recently had children. Others who had kids a little longer ago. How long did it take you to "adapt"?
Posted by Scott at 9:10 PM

When my boys first came home they were scheduled to eat every three hours. Considering it took one and a half hours to feed them, sleep was next to null. That went on for over two months which seemed like forever. Once they were at a reasonable weight, we were able to wait for them to tell us when they were ready to eat -- They are now five months old and in the past three weeks we have started baby food -- I thought that it would help them sleep through the night which is does, once in a while, but we are still getting up between 1 and 3 in the morning on most nights. I've known them for five months now and I'm still amazed by them. To me, children are proof that there is a God. Laura

For Jordan, it took no time at all, like 2 days. He normal sleeps through anything, but when she came home he woke up every 20min. and checked on her!!! It was so cute!!! But, for me it was more like a week, or a little over a week. Going from sleeping through the night, and then getting up every 3 hours to feed her, took a toll on me. But, She was sleeping through the night since day one, and I had to wake her up to feed her. So, after about a week I let her sleep and wake up on her own.

So glad to hear that Colby continues to do well. With both children, my preemie Tyler and fullterm Addie...I'm going to say it took about a month to really get used to things. Of course with Tyler I was throughly exhausted, with Addie it was a breeze...no worrying :)

With Tyler we were instructed to wake him to medicate and to feed. After about 4 weeks I stopped waking him. He ate so little, he was burning more calories trying not to eat, then he was actually consuming. As for medicating they had him taking meds 3 and 4x's a day, the NICU follow-up ok'd doubling the doses twice a day...made it way easier. I made a batch of formula every 24hrs. it gave it more time to settle, so it had fewer air bubbles.

It's amazing just how little sleep a human can function on. I'll admit on day 6 or 7, I called my mother-inlaw (who, at the time was not my biggest fan and lived two hours away) and begged for a three hour nap!!!

Tyler was on Nutramagin (sp?) for a while, we had everyone we know sign up on the Similac website and collect the coupons they send in the mail for us. Sometimes they're $5 and $7 dollars. My regular grocery store would order them and keep them at customer service for me.