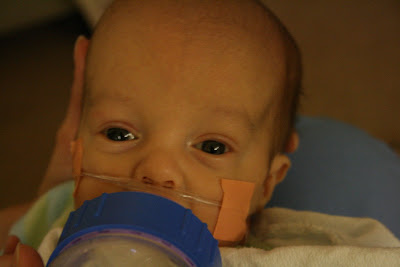 Colby looked really tired last night. But he just got done with his last immunization shot and the nurse said he might feel a little of because of that.
I did ask about his hydrocephalus. The nurse he had last night was new to him (in other words, she hadn't had him before). So I'm not entirely sure she knew his whole situation. Anyway, she said that his hydrocephalus is getting better. She measured his head while I was there and it really hasn't changed for a bit. My only concern is that as I understand it, as his skull hardens, the hydrocephalus won't be able to push his skull outward. The pressure instead just puts pushes on his brain. So I'll ask his nurse again today to see if she has the same take. I'm also going to see if I can speak with a doctor.
Colby will have his liver checked today to see how it's working. Some of the drugs he's been on can affect his liver.
One update on his lungs.......if he fails this coming week's oxygen test, they'll probably give him a dose of steroids to help his lungs a bit. That will hopefully get him on track and help him breath without his cannula.
Tracey is already off to work (she works early in the morning a couple days a week.). I got up with her because I've got a lot of work I need to get done today before I head to the hospital. This afternoon the nurses are going to teach us about giving Colby his medications so that should be interesting.
It's funny how there are stereotypes out there. When I tell people about Colby's story, I often hear "Wow, your wife must be tired! I'll bet she goes to the hospital a lot." Now I'm not looking for a "good dad" badge or anything. But I find it funny that there's just an assumption that the mother is very involved, and that me, the father, is somehow just not that involved with the whole NICU thing. I don't get upset or anything, I just find it interesting that people take that stance.
Posted by Scott at 5:11 AM

If I were closer I'd give you a very official looking "Best Dad" award. It is really assumed that the mother always has more involvement. In my case it was true, Matt visited on days off only. He made the morning and late night NICU call for daily reports. For my 100+ visits, he visited about 30x's. I kept the online journal and updated friends. He had a bit of an anxiety condition that got worse after Hayden died...so we did what each of us could.

You are a super duper dad!!! Long NICU stays are exhausting, both physically and emotionally. Enduring the death of a child is devastating. You and Stacey have handled it better then most. Taking breaks when needed, but also going strong when necessary.

Hopefully Colby's hospital stay is just about over. In the end the reward is amazing. You grew a one pound baby into a thriving healthy infant...outside the womb!!!

You can't hear me...but I'm applauding you both :)

I'm sorry I haven't commented - I have been reading every day but my office finally blocked Blogger so I couldn't comment. Anyway, I think it's unfortunate that Dads don't get credit for their roles. It is just assumed that Moms feel things more and are more involved. Leftover thinking from the 50's I guess, when Dad's weren't even in the delivery rooms! I think you are doing a remarkable job!
I hear what you are saying about this really taking its toll on you guys. Our NICU time was a flash in the pan compared to what you guys are going through and WE were burnt out. Keep hanging in there and keep being there for each other. Don't worry about the rest of the world. You'll be back to reality soon enough. The most important thing is for your energy to be on getting your core family unit through this time.

It's a shame that people don't recognize "hands-on" dads like you,but i'm sure all of us who read your blog know you really love and care for your son,and are there for his every milestone.
I wish I could give you and your wife a huge hug and tell you how much of an inspiration you are to me.
hugs,
Linda

Scott I am glad to know that my husband isnt the only one who feels this way...we are 350ish miles from home in the NICU and my husband manages to be here no less than 36hours a week with our babies! I am certain that you are totally understanding about how hard it is to work and support your family along with travel time and all that involves...he gets a bit upset with the remarks from customers about missing work he just thinks to himself...'you are right, I miss work to see my babies you are so right! did you not see your newborn baby? Why are you asking me not to in order to be here to sell you what is essentially a toy?' I am sooo happy to hear another man who is a wonderful NICU dad...they are few and far between and happy to hear another wonder about these things!

Take care and kudos to you!
Melanie

and hugs to Colby from Jordan and Dekar!