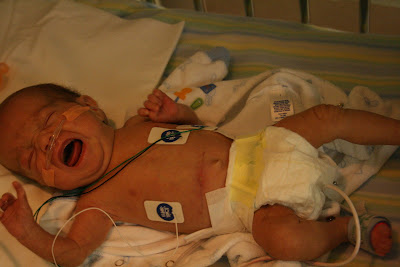 (Colby is a great communicator.....he lets the whole NICU know when he's hungry. And when he's hungry AND getting changed.....his message is very clear! You can see the scar that's left from his belly surgery. It's a little red but the doctors say it's probably some of the stitches from underneath just poking through and nothing to worry about. They're keeping an eye on it though) 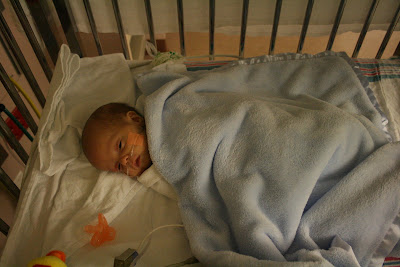 (But with a fully belly, Colby's a happy camper. Thank you Ma Dimauro for the cosy blanket. : ) Colby loves it!)

About nine months ago, December 5th started to have a very special significance to us. It was our twin's due date. Little did we know they would arrive 101 days early. I would be fibbing if I said that Tracey and I don't ever think about if they had gone full term. Obviously things would have been quite different. But we feel that going through all the "what if's" doesn't do us any good. Things happen for a reason and we can't change that which has already happened....just how we react to it all.
So here we are, December 5th, Colby and Avery's due date.....and all is well. The past 4 months have taught us a lot. We've met some absolutely wonderful people. We've learned much more than we ever thought we would about babies, pregnancy and development. We have a beautiful new son, a wonderful teenage son and a great relationship between us all. We have done all we could to make this as positive of an experience as we could and we think we've done an OK job. And those are all wonderful things.
Colby was great today. I visited with him for a bit and he was happy and content. I like hold him in one arm, rub his head with my other hand and rock him while I tell him what's been going one. He usually just sits there, watching me and listening. Sometimes you can see that he's trying to fight to stay awake.
The doctors and nurses say he's a very content baby. Although I have limited experience with babies, I would have to say he's pretty easy going. He gets fussy when he's hungry, but apart from that, he's just content to look around and listen.
They did his oxygen stress test today and once again he failed on the first part. The specialist said that it could simply be that he's growing so quickly that his lungs aren't able to keep up. I guess that makes sense. This will be our next hurdle to overcome. The nurse said if he can get to the point where he can at least rest and cry without help, they may send him home with oxygen that he can use when he eats. But that's still a little ways away so we'll wait and keep our fingers crossed.
It's funny because pictures aren't kind and sometimes I get home and look at the pictures I've taken and think that his head is really large. It is larger than a "normal" babies head because of his hydrocephalus. I do wonder to myself if it will always be proportionately large or if he'll somehow grow into it. Since we've moved to the Special Care Unit, our doctor visits are less. In a way that's nice but we're used to the doctors coming by to give us updates. I think I'm going to ask tomorrow about his head. When I went into the hospital today, a new nurse had him. Because this was the first time having him, she wrote notes about him on a piece of paper. I saw it and on it she had written "Hydrocephalus and shunt". Now, Cobly doesn't have a shunt now, so I have to wonder if the doctors may be considering this. Just about all of the other mothers of babies with hydrocephalus have asked when he's going to get a shunt. But in the NICU every doctor we've talked to said his case wasn't to the point he'd need one. I just get worried having not talked with a doctor for a bit and then seeing this note. Yup, I'm going to ask about it tomorrow.
Posted by Scott at 5:29 PM

Scott,
I just spoke with my dad and Brigette last night and heard about your family's story. I then found the link to this blog and spent hours reading your postings. I smiled and cried, but most of all wished I could be in CT to give you a hug and meet your beautiful little boy. I can't imagine what your are experiencing and will pray for the continued improvement in Colby's health. Having children was the most important goal in my life as well, and nothing - but nothing, is too great a challange to endure for the sake of your child. About halfway through your stories, my six month old daughter, Amelia, woke for one of her "every 2 hour" feedings. I just looked down at her while she was eating and began to cry. There is no greater love! I will continue to read the blog and hope to see you sometime between Dec 20th and 23rd, when I'll be at my dad's in Thomaston. I love you! Stephanie (jagrhunter@hotmail.com)

I can't even imagine having to go back and forth to the hospital for 101 days. I thought 26 days was so long, but you and Tracey are doing a great job!!! When Maleia was in the NICU we became really close with one family, and her son went through the same thing. He spent, I think, an extra week in the NICU, so his lungs could catch up with his body. Don't worry Colby will get there soon enough. I know it has been a very long 4 months, but just think of all the great times you will have when he is home!!! :) I hope you have a great rest of the week!!!