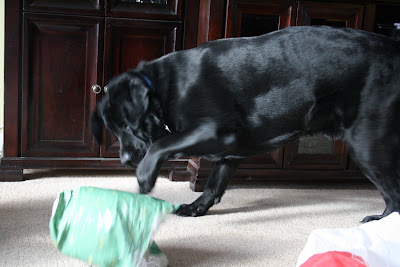 (Hamilton doing his best to open one of his Xmas presents) 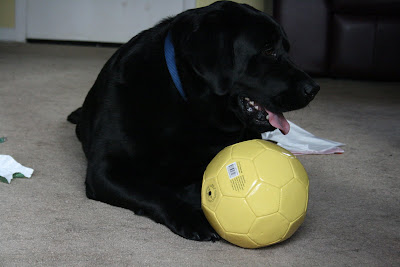 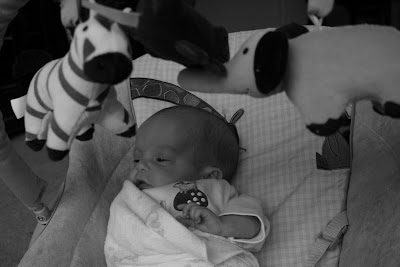 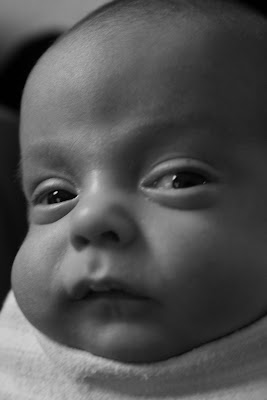 ( "I can look sophisticated if I need to") 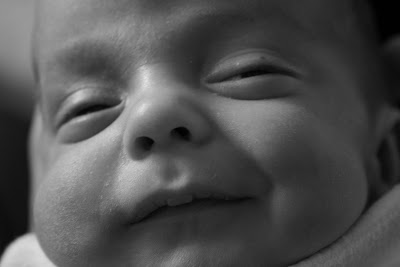 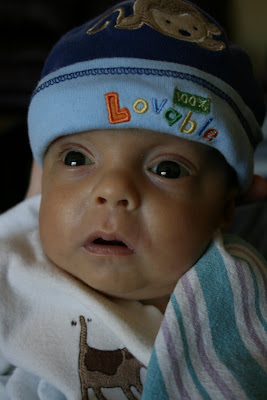 (The hat says it all) 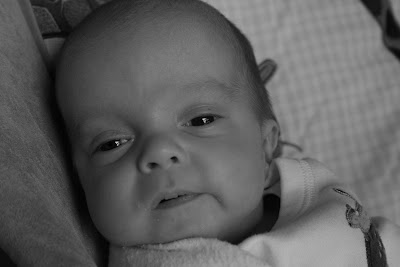 Everything is going very well with Colby. He had his first pediatric doctor's visit yesterday and everything went very well. He's now 6 pounds 8 ounces. He was on a mix of breast milk and formula when he was in the hospital but his belly was really bothering him. He would cry when he ate and he had some nasty diarrhea. So the day before he came home, we switched to 100% Pregestimil and that seems to have done the trick. Holy crap, that stuff is expensive! He's much less fussy and his poop seems to have become more normal. So I think that may have a lot to do with him putting on some good weight. The doctor asked many questions about his behavior and development. At least for now, he really seems on track.
It's a small world out there. While we were in college and for a couple years there after, Tracey and I lived in an apartment near UCONN. We had some neighbors who were our age and we'd hang out a bit. We each moved on and went our separate ways. Well, when Tracey was at the doctors yesterday, the woman who came out to give her some paperwork looked familiar...it was Beverly our old neighbor! I know it means nothing to all of you but I'm often surprised at how small the world is.

Colby is sleeping pretty much the entire time between feedings. He's taking anywhere between 50 and 90 cc's each time he eats. The only thing is that he hasn't pooped since earlier today. However after looking online, I guess that could be normal for babies especially if they just went to 100% formula. All you parents out there must get a kick out of reading about my nieveness....and probably all the more because I'm a guy. Hey, it's all new to me and I'm doing what I can to learn about it all. I've already mastered holding him in one arm so I can get stuff around the house done and I'm getting really good at changing his diaper in record time while guarding against not getting peed on.

At least thus far, Tracey and I have taken turns during the nightsnights. The night I was sick, Tracey took care of Colby. Then, every since, Tracey has been working so I've been getting up at night. I think that we may end up splitting the nights sometimes too. For those of you who have kids, how did you end up working it out?

I continue this blog for a various reasons. But the main reason is for you guys....friends and family. While Colby was in the NICU, things were changing pretty much day by day. Now that he's home, things are going to mellow out a bit (at least I hope so), so what kinds of things would you guys like updates on? I know....many of you have told me you want PICTURES!!! LOL I'll certainly continue to post them.

But seriously, let me know the kinds of things you would like to know so that this blog stays interesting for you.

Congratulations on Colby's homecoming!
The pictures are great!
What a strong boy you have there.
I have no doubt he will thrive and continue to beat the odds against him.
He is doing SO WELL!!!
Enjoy him. The time passes so quickly, babyhood will fly by! Congrats again,

Hi guys…I remember when Hannah went to 100% formula…it felt like days before she pooped. I called the doctor’s office, and what they told me didn’t work. I put a very little amount of prune juice in her formula once a day. Every time you guys change something in Colby’s diet the first thing that has a problem is the baby pooper. Please keep telling us how he is doing daily (pictures too)!!! I love reading this blog, and can’t wait to meet Colby one day! I have Hannah’s baby mushroom pool for Colby to have this summer…that will be cute!!!
Love, Mary and Hannah

Colby seems to be doing much better!!! He looks so happy, to be home!!! :D

I understand everything about, your baby and pooping. Maleia had her intestine surgery, and I was keeping track of when she pooped, and how much in each diaper, and how many times a day. But, as they get older, that all changes. They may not poop for 2 or 3 days, and it is normal. Also, it will get thicker, so it takes a little longer to come out. But, the main things to look for are; him throwing up, everything he has eaten after he eats it, if the throw up is green, a hard tummy or a bump on one side, or if his tummy is "swollen" more so than normal. Those are the big things to watch for. Also, if they are straining I believe you can buy suppositories over the counter.

I would love to hear about, his development, milestones, and firsts!!! And of course many many many pictures!!!

I was just going to say exactly what Jamie, Jordan and Maleia (beautiful name by the way) said. It's normal for habits to change after a change in diet. Also when formula is medically necisarry, as it is this case, sometimes insurance can help out. You may want to talk to your pediatrician.

Colby is a beautiful boy. What does Hamilton think. I've heard of dogs that treat babies like puppies.

Colby looks VERY happy to be home. My babies were on Progestimil as well. If your doctor writes a script for it, insurance should cover the cost. Hope you all have a wonderful New Year.

Our insurance did not cover the formula but WIC did. Lauren got SSI until she came home from the hospital. Due to the length of the stay in the hospital and the prematurity she rec'd WIC & medcaid for a year even with we did not qualifiy for the income.

We love to hear anything that is going on! My children & I love the pics too!