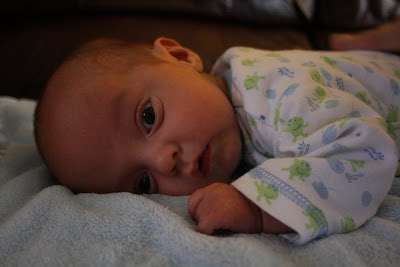 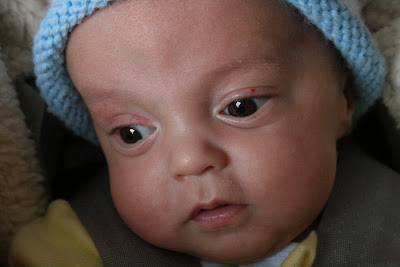 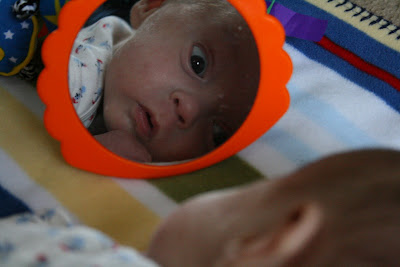 (Pictures from earlier this week)

I should have expected it I guess. I'ts happened before and now....once again....a slight change in plans.
Colby's surgery has been put off until Tuesday. We need to have him there by 9am Tuesday morning. Nothing to eat after 4am. We're unclear regarding how long he'll stay there. It depends on if he ends up getting just the ETV or if he needs the shunt.
Tracey and I are a bit relieved that he's having surgery. His head continues to grow, though not as fast as it was a couple days ago. But we notice that the left side of his body is notibably less active than the right side. For instance I was changing his diaper today and his right leg was kicking around....but his left leg was moving. It's not that he doesn't move his left side at all. He'll move his arm, his hand and his leg. But it's just less...and and times much less than his right side. So anything we can do to releive the pressure on his brain and hopefully move on from the hydrocephalus would make us very happy.
We've been working on helping him with his head control. We simply prop him up and help him keep his head up. Depending on how tired he is, he sometimes keeps it up well and other times lets it roll around as if his neck were a string. Poor guy. When I use my hand to help his head up, I can feel the weight and it can't be easy for him.
He is tracking with his eyes very well. A couple weeks ago, if you moved too quickly, he'd loose you. But now he's watching things around him and moving his eyes along.
So that's it, just anxious to get this up coming week behind us. With all that's been going on I just haven't felt very social and thus haven't been posting much.
Thank you all for your thoughts, comments and e-mails. Colby is certainly not alone and that makes me feel good.
Posted by Scott at 6:31 PM

just wanted to say that I'm thinking of you guys. I will be wishing Colby all the best on Tuesday. Good luck!

We will be thinking of Colby and you all on Tuesday. We will be wishing Colby the all the best, and will be praying for him.

We will be thinking of you guys tomorrow.
Love, Mary and Hannah

You guys will be in my prayers tomorrow, and that will continue until he is in the clear. Continued thoughts and prayers...