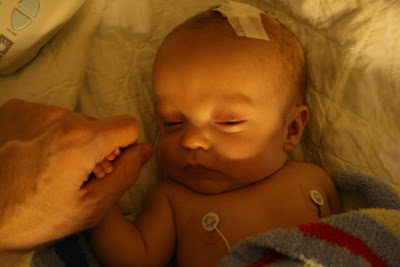 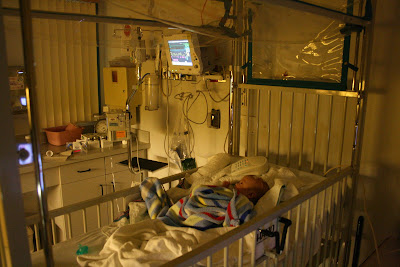 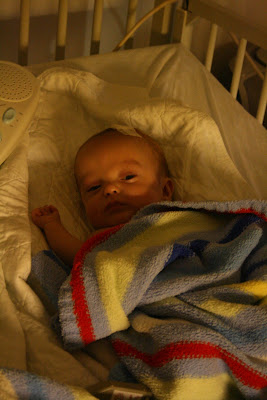 (Pictures from just a couple minutes ago. He's more alert now than he was before. But still not happy about his current condition.)

Nothing too new to report. But when you're sitting in a hospital room at 1:30 in the morning, pretty much wide awake, what's there to do but update your son's blog, right?
Colby slept for about 4 hours. He was out cold. Then he woke up around 12:30 and has been fussing a lot ever since. He'll settle down for a couple minutes, then started crying again. They're giving him some pain medication, but I can tell he's still in a lot of discomfort. His belly is bothering him too and that's just adding to the problem. It's hard because when he gets going, there's just nothing that seems to make him feel any better. I'm hoping that as the morning comes, he'll start to feel a little better.
Posted by Scott at 1:23 AM

Hi there,
I randomly stumbled upon your blog, and am amazed by your journey and at what a strong little guy Colby is!! I have a daughter who was born just a bit before Colby & Avery, and I just read through your entire blog tonight. I cannot imagine staying so strong and being able to post about it so regularly, so thank you for sharing your story.
Your family is so beautiful and amazing.