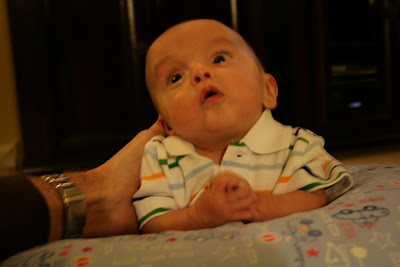 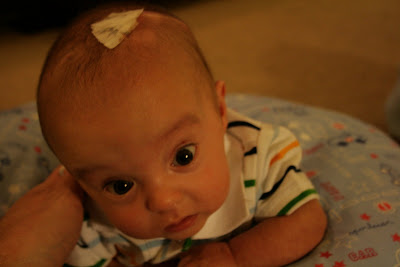 (What a strong boy holding his head up!) 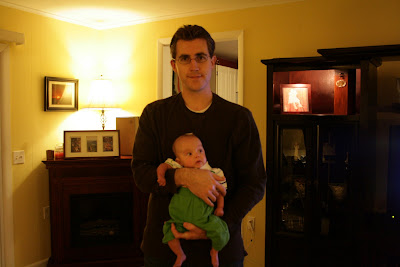 (Daddy and his little boy....kinda a whacky way to hold him but it worked at the time. I didn't realize it was pulling his pants half way up to his ears. )

It's been a long couple days. Ever since Colby had his surgery he's been a mess. Just extremely fussy, crying uncontrollably at times and totally inconsolable. And that's not at all like him. Some of the tests from the doctor have come back and they don't show any virus in his belly or anything.
But yesterday Tracey had had enough with poor Colby being totally upset and with us not knowing what was wrong. It looked like Colby's belly was getting bloated so she called me to let me know she was taking him to the Emergency Room at the children's hospital. I met her there around 10:30 in the morning. They examined him and did Xrays. The good news is that nothing showed up. At around 2pm Colby was discharged and we were told that he more than likely just had a bit of a stomach bug or something that may have been made even worse by his shunt draining into his belly.
So what's so good about today? Because when I got home today, he's much more like his old self again! Not too fussy and very alert and looking around. That just put me in the best mood. What's more, we've been working with him to use his hands to try to grab at things. For a good 5 minutes or so, I would put him in front of my face and he would grab at my chin and lips and hold on pretty good. Then I put him on his pillow and he was lifting his head up really well. He has a favorite stuffed dog that he enjoys playing with so I propped him up on my lap and put the dog in front of him, propped up as if it was another baby. Colby was looking at him, grabbing the stuffed dog's paws. Just great to see Colby progressing!!!!!!!! I think any parent is thrilled to see their child do things. But when it's unknown what your son will and won't be able to do in life, seeing him do something new is just amazing!
It just goes to reinforce our belief that Colby will be able to do a lot and that if you put in the time and effort, good things can happen!
Posted by Scott at 8:39 PM

That is so great!!! He is such a big boy!!! He looks great too, I hope his tummy stops hurting him, so he is completely back to his old self.

Our thoughts are with you!!!

That's great news. I've been following along for a little while now. I just never know what to say.

I love that you were able to step back from all the medical crap and just enjoy your son learning to use his hands more. Those little moments are the best part of parenting. My single friends look at me funny when I get excited about my son learning to make a raspberry, but those little things are what make it all worth while.

Now on to the feet!