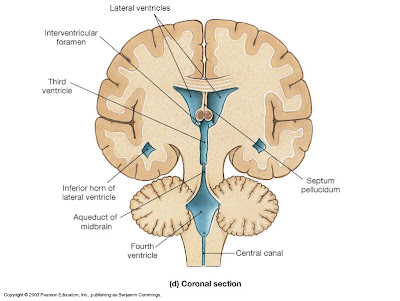 I Googled ventricles and came up with a couple pictures for everyone so that you can better understand what's happening with Colby. The two pictures above are both of the brain and both illustrate the ventricular system. The flow of fluid is essentially from top to bottom. In Colby's case, the third ventricle isn't draining into the forth and thus there's a build up of pressure. This buildup is called Hydrocephalus. His Lateral ventricles are larger than what you see in the pictures above. When his shunt isn't working, the pressure builds, enlarging his ventricles and pushing his brain against his skull. The pressure on the brain causes irritability and vomiting among other things. This is exactly what's happened these past couple weeks. 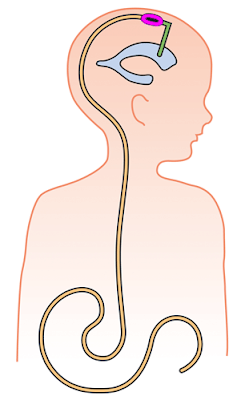 This picture shows how a shunt is placed to go into the ventricle and allow fluid to drain out the top, down a tube which is placed just under the skin and drain into the belly. The pink or purple thing on the top of the shunt is a valve to allow fluid to drain, but not allow fluid into the brain. In Colby's case, he had a shunt on the left side of his head for the past 10 months and just today, they removed that from his head and placed one on the right side to access that ventricle in hopes that it would allow for better drainage. The shunt still connects to the same tube his old shunt used to then drain down into his belly. I can't really tell what the top of his head looks like as it's all covered in tape.
I hope this helps to explain things a bit.
Posted by Scott at 9:46 PM

Thanks for posting these pictures! It helped me better understand exactly what is going on with Colby. Bless his heart. I hope he doing better. I'm still thinking about you guys all the time and keep us posted.

We are thinking of you guys! Colby is an amazing boy and he is so strong.
Love, Mary and Hannah

Dears, I just found out your blog and i cannot really read all of it but I am a craniosacral therapist and I wonder if you ever have heard of it. it could be very helpful to improve condition for Colby.

My Heart Goes Out to You All!