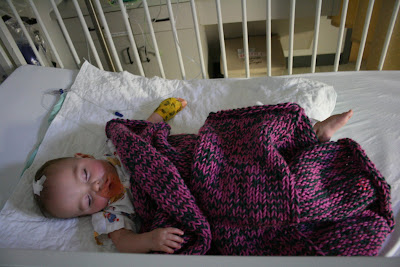 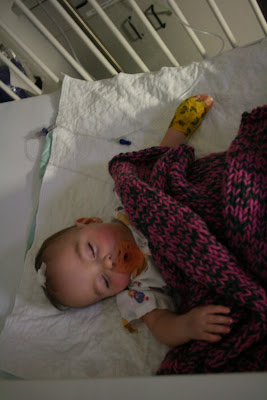 (Colby out cold recovering from his shunt replacement)

Well, Tracey called the neurosurgeon this morning because Colby wasn't getting any better. They asked that she bring him into the hospital around 8:30 where they did a CAT scan and discovered that he had outgrown his shunt and it was malfunctioning, thus putting pressure on his brain again.
Colby went into surgery around 2pm this afternoon to have a longer tube put into his ventricle.
He's doing well tonight. Very tired and pretty groggy. But he took his bottle and even ate some Cheerios. They've got him hooked up to a bunch of monitors. It's been a while since we had to juggle the wires and probes when holding him. Boy does it bring back memories!
The plan is that I'll stay with him through the night. The doctors will take a look at him and if all looks well, he'll come home tomorrow. Amazing that someone can have surgery that puts something through their brain one day and then they're sent home the next!!!
Both Tracey and I are exhausted. We've been taking shifts over the past couple nights to watch over him at home. She's been taking care of him the past two days while I worked. We've both been worried about his condition, wondering if it was his shunt. Now that we have our answers and his surgery is done, we're relieved and tired.
So that's the latest. I'll post more tomorrow after the doctors come in.
Posted by Scott at 8:54 PM

What a strong little boy! I will keep him in prayers for a quick and speedy recovery!!

Colby, hang in there buddy!

Sending big hugs to Colby! I hope he is feeling like himself again soon! I'm glad they figured out it was the shunt and took care of it immediately. Hugs to you guys too b/c I'm sure you've been stressed, worried, and exhausted. Hang in there all of you!

We will keep in our prayers!!! He will be home soon!!!