Last day of being One 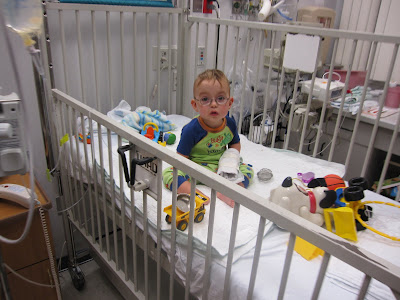 (Colby wondering if he can go home yet.) 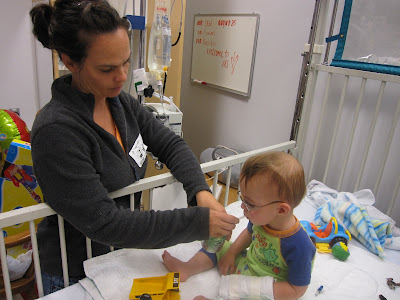 (Colby with the best momma in the world!) 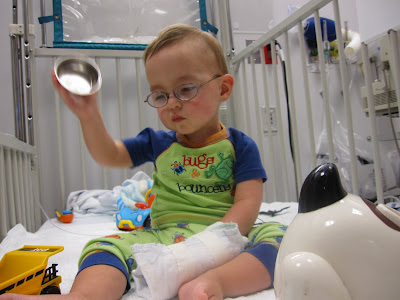 (Colby has an IV in his left arm. So they wrap it in a towel and then tape to keep him from pulling on the IV.)
Today has brought a lot of good news. Colby woke up this morning much more awake and interactive. As the day progressed, he gradually regained his strength and came back to his normal self....pointing at just about anything round and saying "Ball!!!!", asking for momma and dadda, and even letting the world know what he REALLY felt when the doctors came into the room tonight, he looked up from his toys, saw then and blurted out "Ow no!"!!! haha Yeah, that made us all laugh.
There are no real answers as to what caused Colby to be so sick. The doctors think it might have been a stomach virus, coupled with some constipation, which together increased the pressure in his belly. This caused his shunt to possibly back up a little and put a little more pressure on his brain. Not enough to be picked up on a CAT scan but enough to affect our little boy. Be it as it may, he's doing much better tonight.
Tracey came into the hospital early this morning. We chatted for a bit and it was time to switch shifts. I came home and went to sleep. When I left him he was maybe 50% of his normal self. When I returned, I was greeted by Colby putting his hands outstretched towards me saying "Dadda!!!". That just makes me melt inside.
They want to keep him one more night to gradually get him off the IV and just watch to make sure he stays strong. If all goes well he'll come home early tomorrow, the morning of his second birthday.
I'm going to get some rest. Thanks again for all the thoughts, prayers, e-mails and all. I'm always humbled by the interest so many have expressed in following his journey.
Posted by Scott at 9:23 PM

I'm sorry you guys are having to spend more time in the hospital. I'm thinking of you guys.
And I hope Colby has a wonderful 2nd birthday!
A few posts ago, you wrote about the little girl in his class, Avery. It gave me chills and a little teary eyed, but in a nice way. Like that's pretty cool. Happy birthday to Colby- tomorrow.

YAY!!! That is great news! I am so glad that he is doing better. :) I was excited to get on and see pictures of him sitting up in the bed. I laughed out loud about the "Ow No! when the Dr's came in!!! HAHAHA! He is a funny boy. Maleia just cries hysterically when she sees a nurse, Dr, or anyone in scrubs. So glad he is better!!!