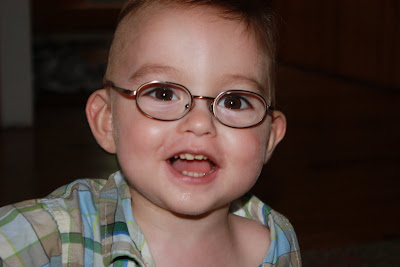 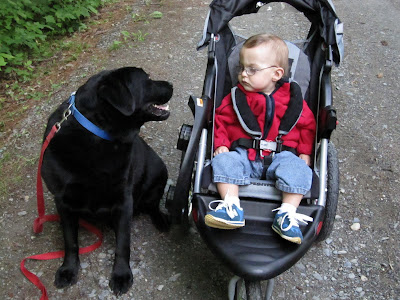 ( Colby and Hamilton up at camp in Maine) 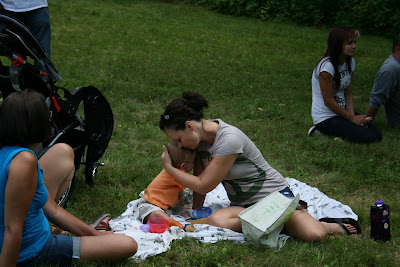 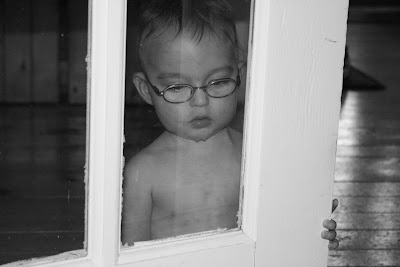 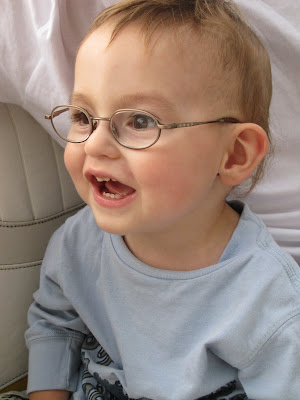 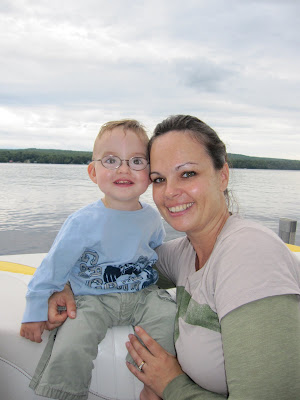 Well, it's been a busy month. Colby is nearing his second birthday. He seems to learn new words every day. I love to hear him call "Dadda!!!!" when I come into the room. Or to hear him communicate what he wants or is interested in. He's learned the word "Help" to mean if he needs help with something. It comes out more like "ewwp" or sometimes like "uwwp". But we know what he means.
He's gotten pretty good at repeating what he hears. Mostly just one word at a time. So we need to be a bit cautious about what is said around him.
He's also finally gotten pretty good at sitting up once he's lying down. It took quite a while, but he'll often push himself up if he either falls over or wakes up in his crib. If he wakes up in his crib and pushes himself up, he'll scoot around and explore his bed as best he can. The other day we hear him crying from him room and heard a high pitched "Hewwwwp....Hewwwppp!!!!" Tracey found him lying with his back against the side of the crib and his arm between the rails. So apparently he got his hand out between the rails and with that hand out of action, he couldn't push himself up. So...he called for "hewp".
His fine motor skills are great. He's very good at manipulating things, opening or turning objects. He's finally mastered drinking from one of his sippy cups with a straw. We'll put water in the cup and he'll ask for "Wadaahhhh".
I think back a lot either to before we were pregnant and dreaming of what it would be like to have children. Or I think of our time spend on bed rest, then in the NICU. Two years ago tonight, Tracey and I were going on 5 weeks on bed rest in the hospital. She was still pregnant with the twins. We'd sit up, watch moving on the laptop, talk about our future, about how best to get through the situation we found ourselves in. Never could we imagine that in just four days, our years of trying, waiting...would soon end and we would meet Colby and Avery. But here we are, getting ready to celebrate Colby's 2nd birthday. I find myself listening to Colby talk, watch him sit up, play, laugh...and it makes me so happy that my son is doing so well. I always dreamt of having a family. Though my vision was to easily get pregnant, to go through a "normal" pregnancy, then deal with the "normal" development of our children. Here we are, a rather non-traditional past 7 years as far as raising a family goes (5 trying to get pregnant and 2 since Colby and Avery were born). But it feels as "normal" as I would have every imagined it. It's interesting how life does that....how life sometimes sends you down paths you never imagined...yet...if you make the best of things....you can't image them any other way.
And at times, I see things in Colby's life that touch me. The ways strangers will impact us....or the ways Colby will impact strangers. The last two years of ups and downs and to see him doing so well today. Or certain things that happen in his life that touch me deep inside.
Colby goes to a daycare two days a week now. There are quite a few kids there. They're separated in different rooms based on their age. I'm not sure how many kids are in Colby's room. Most of the other kids in the room are walking, but Colby doesn't yet crawl....so he does his best to get the toys and play with the other kids. Obviously the adults in the room help him. But the daycare director told us that there's a girl in Colby's room that has really taken a liking to him. She's about his age. She'll will bring him toys. She'll play with him. And her name is Avery. Be it what it may, but it makes me feel good inside.
Posted by Scott at 9:12 PM

That is awesome!!! He is getting so big, Jordan and I talk about you guys almost everyday. With Colby almost 2 we were thinking about how much you all have gone through as a family. And how maybe one day we will meet face to face, and have a play date. :)

I cannot believe that the little girl's name in his daycare class is Avery. I got chills when I read that. How neat.

Wow....that made me tear up. Thanks for sharing.

The bit about his friend Avery brought tears :) I went on Tyler's first fieldtrip last year...he chose to share a seat with a school friend. It was his first school bus ride, shared with his friend Hayden. It broke my heart that it wasn't his twin Hayden. But made me smile to think...hmmm, riding on a bus with Hayden...the way it was supposed to be.

It is amazing how far Colby has come in two years.