A Visitor from Chile 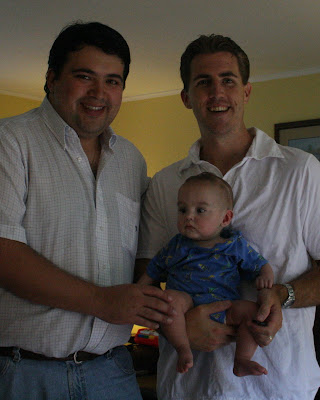 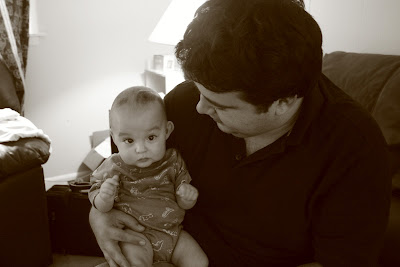 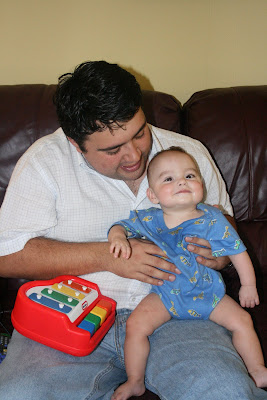 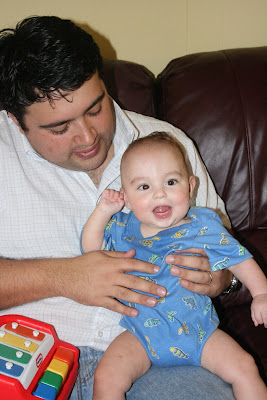 I think in one of my postings I explained how I lived in South America for a year. In Chile to be more exact. I was a Rotary Club Youth Exchange Student and went down there the year after I graduated from high school here in the US. I lived with a wonderful Chilean family who took me in as one of their owns sons. They had three sons, Rodrigo, Francisco and Felipe. Francisco was up in the US doing his year abroad when I was down there, so we never met. Francisco now works for a Chilean Wine maker and was up traveling around the Northeast on business so we got in touch and he came over the house for a couple days. Great to meet him and get updates on my Chilean family. I hope one day to go back to Chile to visit everyone. It's been 15 years now so I'm sure a lot has changed. I'd love to teach Colby some Spanish too when the time comes. 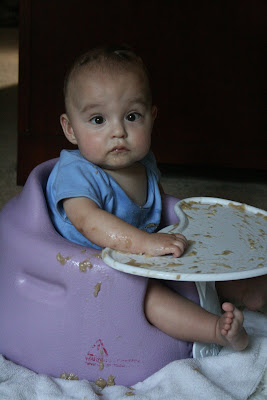 As for Colby.....we have an occupational therapist who comes every other week (the weeks birth to 3 doesn't come). This was only her second visit with Colby and she was pretty pleased with his development thus far. We're still trying to work on his arm strength to help him push himself up when he's on his belly. Then to crawl when he's ready. It's a slow process. He really just doesn't get it yet that he needs to put his arms down. When he falls over or goes onto his stomach, his reaction is to pull his arms upward. So that's the latest thing we're working on with him.
She asked if he seems hypersensitive with his hands. Some babies who spend a lot of time in the NICU get a fear of touching things or being touches as they were poked and prodded so much that they think anything that touches them will probably hurt. Luckily he doesn't seem to show any signs of that. I do remember when he was in the NICU that Tracey and I would regularly have our hands in the incubator simply lying our hand on him, touching his hands and feet or gently rubbing him. I wonder if in some way this helped a bit.

Anyway, she asked if he was adverse to touching wet things. We didn't think he was but weren't too sure. So the other day I smashed up a banana and put it on his tray. He's NOT adverse to touching wet stuff !!!!! He seemed to enjoy smashing it around and spreading it just about anywhere he could. All was well until he started putting his hand up in the air and slamming it down on his tray, thus spreading banana everywhere.
Another change is his formula. We've wanted to see when we could introduce a new formula. Ever since he came home from the NICU he's been on a special, predigested formula called Pregestimil. It's pretty expensive and now that he's eating more, it's getting pretty tough. We can no start to introduce a new kind of formula. It' still expensive, but it's about $5 less a can. We'll take any savings we can! We just started yesterday and at least thus far, he seems to be tolerating it well.
Posted by Scott at 7:05 PM

I almost cry just by seen you guys together, its a picture i thougth i could never seen.
We would love to have you and your family here in Chile, maybe i could teach evan in the arts of "Piscola".

Felipe.
PS.: If i made any "use of english" error, please correct me.