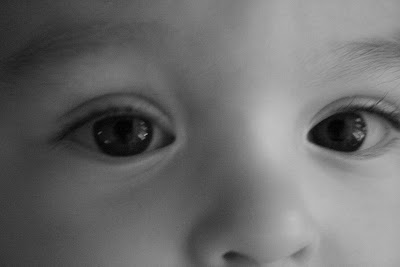 As you know, Colby developed an "eye thing" a couple months back. He would squint his eyes, look just about straight down and sometimes turn his head a little to the side. There didn't seem to be any rhyme or reason to these spells. But they gradually increased in frequency to the point where some days it seemed like we was spending more of is waking hours with his eyes squinted and not.
We brought him to the ER while in Maine, then to his neurosurgeon back home and both suggested that it may be seizure activity. So we had an EEG done, met with a neurologist and were told that although the EEG was abnormal, there didn't seem to be any seizure activity.
So....it was suggested we go see an eye specialist and maybe it was some kind of eye spasm. The appointment was made.
Then, even quicker than these episodes began, they've disappeared with seemingly no lasting effects. We're still going to follow up with the eye doctor on other vision questions and mild cross eyed-ness. We will ask them about these spells but I'm sure when we bring him their report will be "Well, being that he's not doing the "eye thing" now, all we can tell you is that...well...he's not doing it." Hopefully they will have seen similar cases and can offer some insight.
Either way, our little boy's "eye thing" is, at least for now, a thing of the past.
Posted by Scott at 9:12 PM

Another time to stop and praise the Lord. I am glad he continues to grow and his health is getting better. God is good.

That is awesome!!! Hopefully it was just a little thing that GOD healed, and you wont have to worry about it anymore!!! I hope you guys are doing well! :)