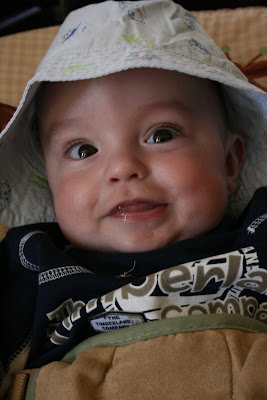 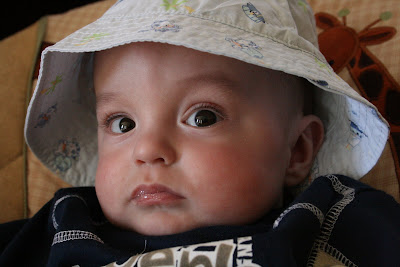 Sorry for not posting anything in what seems like a very long time. Things have been busy with work and now that it's warmer and lighter out, we find our days getting filled up pretty quickly.
Anyway, our Colby is doing AWESOME! He had his last visit at UCONN and they pretty much said he's doing great and doesn't need to go back to them. He can just go to his pediatrician now. His lungs are clear, his motor skills are moving along, he eats like a true champ, everything is progressing very well. We've been working on his head control and he's responded very well. He comes very close to rolling over but just gets stuck on his arm. I think before too long he'll be flopping around pretty good on the floor. He's able to hold his head up and track without bobbling around much at all. He grabs at things much better than he ever has. I just have nothing but good things to say.
Colby loves to stand up. He'll stay on his feet for about a minute at times. He does pretty well with holding on to my hands. Once his legs buckle, he's down. But it's a start.
He's smiles really easily now. Still not laughing outloud much.
I'll need to take some video and post it soon. Maybe this weekend.
Posted by Scott at 8:00 AM

Wow Colby is so cute!!! I love the new pics :)
Love, Mary and Hannah

He is soo cute!! He is just coming right along!! I cannot tell you how happy I am for you guys!!! Colby is such a very strong baby. I bet he'll move mountains!

Colby is so CUTE!!! We are so happy he is doing great :)
Love, Mary and Hannah

it has been too long since i have been here to say hi and check on colby! he is doing great!!! i am beyond happy for you guys and for him too. It is amazing how gifts come sometimes all your hard work and dedication will now be more obvious...enjoy it!! happy moms day to your wife!