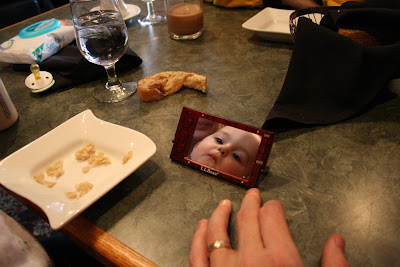 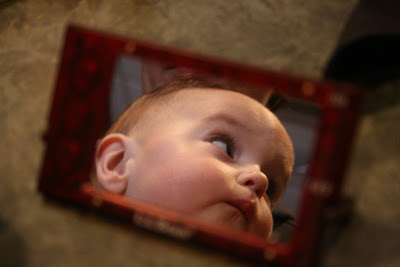 (Colby loves mirrors. He'll lean forward as if to kiss himself....so vain! LOL Or he'll lean one way or the other to change the angle of the reflection and see other things through the mirror. This picture was taken at the Black Rock Tavern yesterday. He was playing with grandma's mirror. Colby was on Tracey's lap and was looking up at me as I took his picture. ) 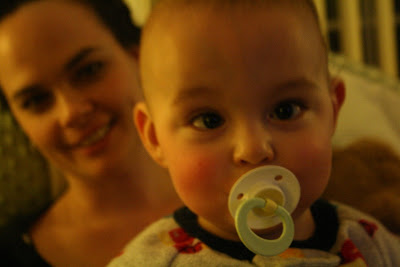 (Colby with rosy cheeks from his fever. Even when he was cranky, he still had his moments of being happy and smiling) 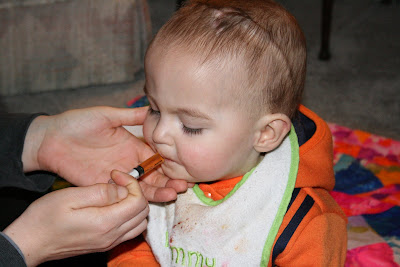 (Here's momma trying to get some fluids into Colby via a syringe while he was sick.) 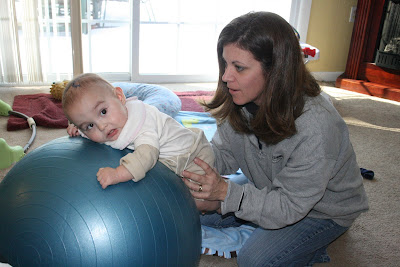 (Here's Birth to Three working with Colby on his ball. I have to laugh because it looks as if Colby is totally distracted by the picture...looking over towards mommy, legs lifted up, LOL) 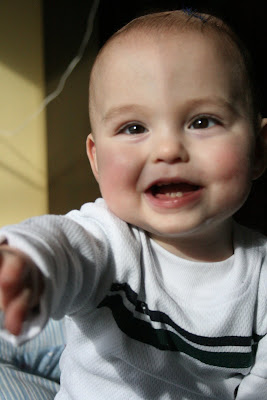 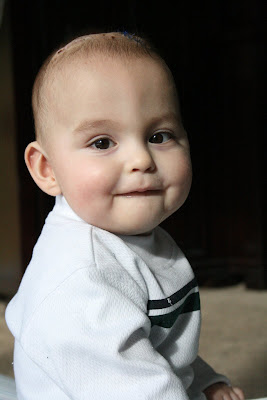 Sometimes it's difficult when you have a child with a shunt. The signs of a shunt infection or malfunction (meaning it's not draining and there's pressure on the brain) are just about the same as when a child has the bug. So when Colby gets sick, we immediately start running down two routes. First, hoping that it's just a "normal" kid's sickness. And then the plan B...contact the neurosurgeon, pack an overnight bag, start monitoring fluid intake, veins on his head, etc in the event it's his shunt.

I think it was Tuesday afternoon, Colby started running a fever and becoming lethargic. He didn't want anything to drink and was very irritable. His fever started going well over 100 degrees, so we called his neurosurgeon. My mom was over and helped keep Colby comfortable and happy. She's great with him. Very long story short, Tracey spent a good 5 hours in the ER where they did X-rays of his chest and other tests to rule out a shunt infection. They sent Colby home at 3am Thursday morning stating it was just the bug. Later in the day on Thursday, the ER called back and said that upon further review, his X-ray showed some fluid in his lungs and said he might be getting pneumonia. So they prescribed an antibiotic and told us to keep a close eye on him. Almost immediately after taking his antibiotic, his condition started to improve. He would eat like a champ, but wouldn't take any fluids. Tracey was worried that Colby would become dehydrated so she patiently kept giving him syringes of pedialyte and Gatorade. At times Colby wasn't thrilled to be taking it, but it worked as Colby kept having wet diapers.

I had planned a bit of a high school reunion for Friday night. Colby's illness started to complicate things and I was wondering if I as going to be able to make it. But by Friday Colby was doing much better so we went ahead with our plans to go back to my home town, drop Colby and Hamilton off at my dads and head out to the reunion. Colby did great....and so did grandma and grandpa, taking good care of him. Even after he started feeling better, he still wanted nothing to do with either his bottle or drinking. However, just this morning he finally took a full bottle of formula like it was nothing. Our normal morning ritual is for me to get up with him in the morning. I'll get a bottle read. As that's heating I start my coffee brewing. Once the bottle is warmed, I go in, get Colby, come into the living room and set him down on his pillow with the bottle. I was psyched to see that he immediately took it from me and started drinking. Maybe it was a bit of the ol' routine that helped. Either way, I'm glad to say that he seems to be back to his happy, babbling self again. He'll stay on the antibiotics for a couple days.

All in all, Colby has been very lucky when it comes to colds or getting the flu. He's now technically 18 months and thus far hasn't had a really bad cold. This was his first bout with the bug. No ear infections or other complications. Sure, he's had more than enough with all his other complications, but we're still happy that he's been lucky with this aspect of his health.

His hair is growing little by little. It's getting long enough and dark enough now to start to help cover his scars and his shunt. Because the area around his shunt was shaved not that long ago, he has areas of longer hair...where it's never been cut, then areas of shorter hair where it has been trimmed for his various operations. You can't really tell though as his hair is so fine.

We've backed off of working with him while he's been sick, but we'll start helping him use his legs and starting to really push him using a sippy cup now that he's feeling better.
Posted by Scott at 7:12 AM

Boy, you guys are becoming regular ole' "been there, done that" parents now!! Feeding fluids through a syringe?? Nice trick! I can think of at least a half a dozen times I could have used that one!!

It's truly amazing how far Colby and Avery's story has come! I'm so happy to see you all experiencing everyday "normal" things...It's been a long time coming.