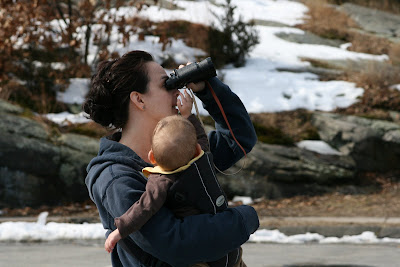 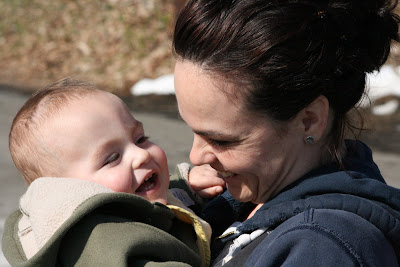 Colby is doing fine. Well beyond his little bought with pneumonia now.
Colby had a routine doctors appointment last week. He weighs 20 pounds. Not quite as much as I'd hoped. But he was sick for a good couple days the week prior and wasn't drinking much. That all could have contributed to him not having gained that much weight.
All in all, the doctors were happy with his progress. They asked that we get an x-ray of Colby's hips to see if there's anything that could contribute to him not wanting to bear weight on his legs. He will stand, but only if you put his legs down, lock his knees and prop him up. He'll then "stand" there, until his legs buckle and down he goes. I've noticed that he is gaining strength, little by little.
We've been wondering if we can gradually take him off his formula and put him on regular milk. Given that he hadn't gained that much weight, we thought they'd keep him on the formula. But he's eating solid foods fine. Sometimes seeming to prefer finger food or spoon feed food to the bottle.
They suggested that Birth to Three come every week, not every other week. So we'll need to make that change.
Although Colby isn't crawling, is still small for his age, he's one VERY happy and content little guy! He's so quick to smile or laugh. He LOVES music and will "dance" with his hands in the air, waiving them about to just about any tune that's on TV or on the radio. It's funny because he'll stop whatever he's doing and start waiving his arms around, usually with a smile on his face.
We got a backpack off of E-Bay the other week. Colby seems to enjoy riding along in it. It was a warm weekend here in CT and yesterday we went down to the shore to go on a bald eagle watch. Colby really enjoyed his time outside. It's funny to think about a year ago when he started doing his "eye thing". He'd squint when he got out into the sunlight. Luckily that condition righted itself without any intervention or explanation and hasn't returned since. So it was very nice to have him outside, enjoying the sun and the fresh air. He didn't take his usual nap, but wasn't a bit cranky for the trip.
Wherever we go Colby draws attention. He'll smile and waive at people as they pass by. Many comment on his glasses and how cute he looks. I think some people notice his shunt and wonder it is. I've only had a couple people ask questions. I usually make the attempt to give a simple explanation to what it is. I think it helps people feel more comfortable, ask questions or share their stories at times.
I continue to feel so lucky that Colby is doing so well. I've told so many people that Tracey and I stated we wanted to make something good of an otherwise tough situation and that we'd empower Colby to do all that he's able to. The plan seems to be working. He's a very happy little boy. Delayed....yes. But showing progress in every way possible. And more than anything, he melts my heart with his soft little touch, cute smile and babbling little voice.
Posted by Scott at 10:05 PM

It's great to hear how wonderful he's doing. I know that I'M proud of him and I've never personally met him, though I feel as if I've known your family for years thanks to your writing outlet with blogger. I have this strong feeling that in a few very short years, there will be no sign that he's a preemie. I know to you and Tracey, he will ALWAYS be your preemie...but I'm he will be completely caught up. It's so tough being a parent to a child that's not right-on-schedule, trust me, I know. Keep up the amazing work, Scott and Tracey. You both are an inspiration to us all.

Love the new pictures!!! We are all happy Colby is feeling better :)
Love, Mary and Hannah

I am so glad that he is doing so well!!! I think he weights more than Maleia now... what a little chunker!!! :) She has started to crawl the "right way" but still commando crawls... it is faster. He will get it when he is ready!!! :) I love the pictures, Tracey and Colby are so photogenic!!!

So happy to watch Colby's progress...so many possibilities for this little guy!!

Best to each of you,
Lynda
(art inspired by the music of Dave matthews)