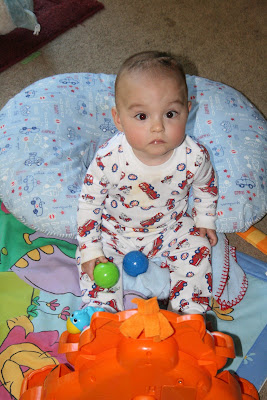 (Colby in his fire engine PJ's) 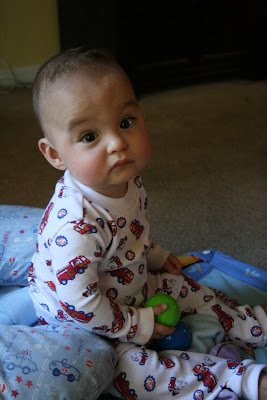 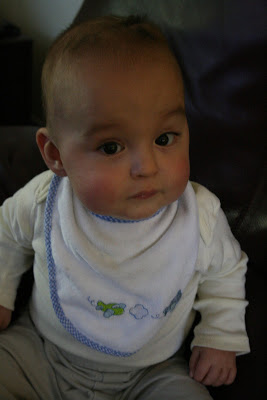 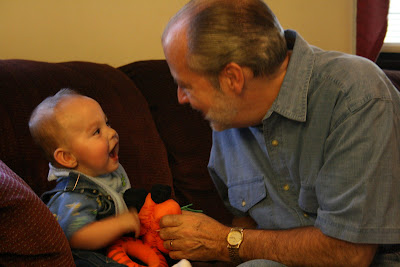 (Colby having fun with Grandpa) 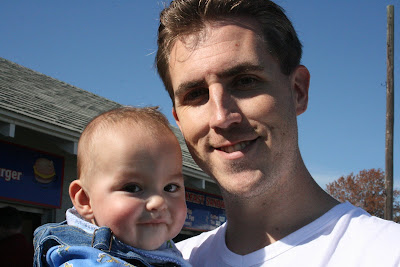 (Colby and daddy at the Garlic Festival in Bethlehem today)

It's been way to long since my last update. I think this is the longest I've ever gone. Sorry about that.
Lot's going on though. Colby had his one year checkup. He's just under 18 pounds now and he grew 4 inches since his last visit. He's really getting to be a big little boy.
He continues to refine his fine motor skills with grabbing things and passing things easily now from one hand to another. We think he's definitely right handed as he uses that hand most of the time. He's started to try to grab the spoon when we feed him. If we give it to him he'll shove it into his mouth, sometimes gagging himself, but at least he gets the idea.
We've really been working with him to feed himself with his bottle. For weeks he'd just cry with his arms straight out beside him. We'd take his hands, bring them to his bottle, but he'd pull back in protest and as soon as we let go of his hands, they'd go flying back to his sides. I guess something clicked and now when we put the bottle in front of him he'll reach right out, grab it and bring it to his mouth! Huge change in our independence....being able to tend to other things as he's taking his bottle!
He's been eating some plain yogurt mixed in with his fruit and is tolerating that fine. He's a great eater and we're thankful for that. We've finally been able to get him off of the Pregestamil and he's now on Nutragamil or something like that. It's a bit less expensive so we're thrilled to be able to start saving a couple bucks on his food. Especially now that he's sucking down the bottles!
Crawling...well...that's still not happening. Although he's tolerating his belly time much better than he ever has, he still doesn't get that he can move himself around. If you put him on his belly, his legs go straight out in back of him and he'll push himself up a bit on his arms, but before too long, he'll just plop down and either be content to just lay there or he'll start crying.
He's a jabber mouth though. Just babbling away. Da-da-da seems to be his favorite thing to say....or at least that's what I think. Maybe I'm biased.
Anyway, I'm so sorry for not posting anything for so long. I'll honestly do my best to post updates, even if they're short ones, more frequently.
Posted by Scott at 9:38 PM

Oh Scott... the second photo touched me... really a very sweet one of Colby... it just captures him so beautifully.

I agree, that second pic of Colby just sitting there in his pajamas just melted me! It is sooooo cute. Colby has really came a long way. He is such a big boy now and you guys have a lot to be proud of. I'm amazed at how you always manage to look at the positive. Going through quite a similar situation it reminds me to stay positive too.

Oh, I love his face. His cheeks. I just want to pinch and bite them! In a nice way. So cute! Always love to hear how you guys are doing, and of course, love the pictures!

It's strange seeing Colby in his slideshow just a year ago, Halloween time. So much has changed and yet it doesn't seem like it's been that long. His lil cheeks are just too cute. Such serious expressions. I love the photo of him playing with his Grandpa.